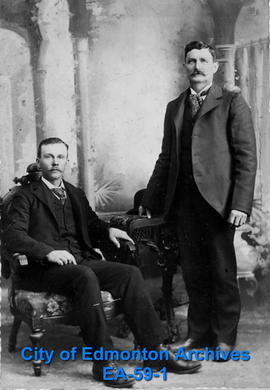 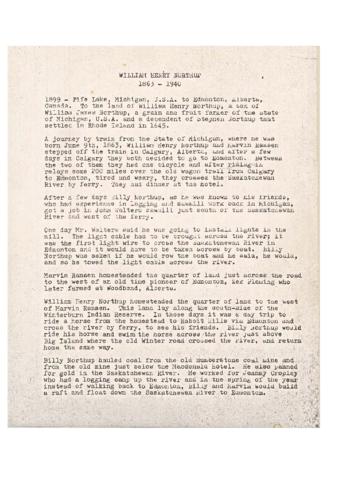 William Henry Northup, known as Billy, was born 9 Jun 1863 in Michigan to William James Northup and Elvinah Southwick. In 1884 William married Madelia (Delia) Baker in Michigan. They had three children, Gerald, Everett and Elvinah (Nina). However Delia filed for divorce in 1897.

In 1899, William Northup came to Alberta with Marvin Ransen, arriving in Calgary by train. A few days later Northup and Ransen travelled to Edmonton by bicycle. Northup worked in lumber at John Walter’s sawmill and in coal mining at the Humberstone mine.

William Northup filed for a homestead on land west of Edmonton (NW 35-51-26-W4), Marvin Ransen also received a homestead on land beside Northup. However the road to this homestead was very wet, muddy and soft and difficult to navigate with his horse. In December 1900, Billy abandoned that homestead, moved to Warwick, AB, where he took another homestead (SE 4-54-14-W4).

William married Elizabeth Elliott on 20 Oct 1903 in Warwick, AB. By 1905, William had ‘proved up’ on the homestead and sold it. That same year, William and Elizabeth moved to Michigan, where son Clarence was born. The family then moved to Florida with Billy’s parents, William James Northup and Elvinah Southwick Northup. Three more children are born to William and Elizabeth in Florida, son Ralph in 1909, daughter Lilah in 1913 and daughter Helen in 1916. Following the deaths of his parents, father William in 1907 and mother Elvinah in 1915, Billy moved the family back to Warwick, AB in 1916. Billy farmed in the Warwick, Cork and Cash Lake areas.

In 1922 the family moved to Edmonton and Billy farmed just west of the city. In 1928 Billy retired from farming and permanently resided in Edmonton.

William Henry Northup died 21 Feb 1940.
William’s sons Ralph and Clarence continue to reside in Edmonton, raising their own families. Daughter Helen Northup was a member of the Edmonton Grads basketball team from 1934 to 1940.

Clarence Northup is the son of William Henry Northup.

This fonds was donated to the City of Edmonton Archives by Clarence Northup in 1968.

The material was arranged according to the filing system of the creator.
The photograph was assigned item numbers with the prefix EA-59.