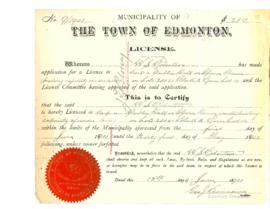 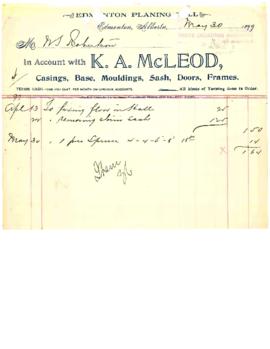 Walter Scott Robertson was born 30 Apr 1841 to Catherine Grant and David Robertson in St. John, New Brunswick. In 1855 he moved with his family to Ingersoll and then Seaforth, Ontario.

In 1878 he began going on trading trips with his cousin Alexander Macdonald of the A. Macdonald and Co. to Winnipeg and Battleford. Robertson joined Macdonald on a buffalo hunt and trading trip to Edmonton in 1882. Upon his return to Seaforth, his asthma flared up again and he immediately decided to return to Edmonton, with the rest of his family moving once a home was built.

Upon arrival in Edmonton he went into business with his cousin Alexander MacDonald and John Cameron operating a general store. Harriet and her children arrived in Edmonton in 1883. As the home which was being built was not yet completed, the family lived in a tent. Unfortunately, once the family took up residence in the house, they discovered it was too small. In Oct 1884 the family moved into a former hotel that had been renovated into a home. This was located on the current site of the parking garage of the Macdonald Hotel.

At the end of 1884, the partnership between Robertson, Macdonald, and Cameron was dissolved. In early 1885 W. Scott Robertson became Sheriff for the Edmonton District. This role was not about policing or operating jails but was performed from an office and was to act as a process server and agent for both the civil and criminal courts. The Sheriff’s duties included collecting accounts on behalf of creditors, including the seizure and sale of assets, summoning jurors, conveying prisoners to the penitentiary, executing warrants, and levying fines.

As well as being Sheriff, Robertson purchased several parcels of land and did some farming. In 1882 he built Robertson Hall on one of his properties. For many years he operated Robertson Hall on Jasper Avenue which was the focal point for many of Edmonton's social and musical events.

W. Scott Robertson was associated with various organizations in the city. He was a founding member of the Edmonton Rifle Association and had memberships in the Edmonton Rod and Gun Club, the Edmonton Club, and the St. Andrew’s Society. He often acted as Returning Officer for the Edmonton District in territorial elections. In 1899 Robertson became one of the directors of the Edmonton Industrial Exhibition.

Also in 1899, Robertson built a summer home on his property at Cooking Lake, calling it Spruce Lodge because it was made of spruce logs. Spruce Lodge became an integral part of the Robertson family activities having large gatherings of Robertson’s children and grandchildren.

Though the family lived in several houses in Edmonton, Robertson had his final house built in 1913. It was built in the ‘Prairie Style’ of Frank Lloyd Wright and is located at 8120 Jasper Avenue East. The home was renovated in the 1980’s to preserve its historical character and has received provincial and municipal historical designation.

It is unclear how the Sheriff's Office acquired the records.