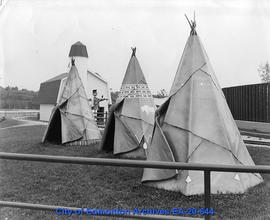 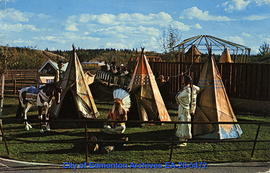 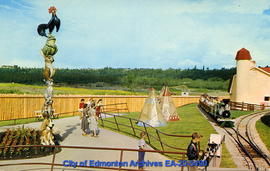 The Edmonton Zoological Society was created in 1926 by a group of like-minded citizens who established a zoo in Borden Park. In 1930 the City took over maintenance of the zoo at Borden Park, while the Zoological Society maintained an advisory role. By the late 1940s Borden Park was no longer deemed suitable as a location for a zoo, and in 1950 the City began looking at alternative sites. In 1956 the City decided to build a children’s zoo in Laurier Park. By August, 1958 plans had been made to add story-book characters to zoo. The plan was to have a five acre children’s zoo, two lagoons, a bridge, a mini railway, and illustrations with animals of storybook characters. In November, 1958 Council suggested creating a Zoo Advisory Board to help guide the zoo.

The Storyland Valley Zoo opened in summer of 1959 as a small children’s zoo featuring a variety of animals and other attractions, all presented around a storybook theme. The zoo was operated by a supervisor under the Parks Department (1959-1961), with assistance from the Zoo Advisory Board, which provided advice to City Council in connection to projects and policies relating to zoological issues. The zoo became part of the Parks and Recreation Department when it was established in 1962. It continued to be operated independently from the other administrative units within the Department until around 1968, when it became part of the Revenue Programs Division of the Recreation Branch. Other sections included aquatics, arenas, ski hills, golf courses, concessions, and the Planetarium. By 1980 the Zoo had moved to the Major Facilities Branch, where it remained until 1997, when another major reorganization which moved the Zoo to the newly formed Recreational Facilities Branch of the Community Services Department.

Since its creation the Storyland Valley Zoo has continued to grow. In 1963 a master plan was prepared to develop an additional 100 acres, and in 1965 the Winter Quarters were built. In 1973 additional exhibitions were planned, though they were not constructed due to a lack of funds. A feasibility study was conducted in 1975, a new master plan in 1977, and another in 1979. In 1980 an architectural firm was hired to begin planning for a major addition to the zoo, which caused considerable controversy for several years among members of the community and the city at large. In response, a Citizen’s Zoo Advisory Committee was established in October, 1981 to determine and assess concerns around zoo expansion.

The most recent major addition to the zoo was a $43 million project announced in 2010 which saw the remaining storyland elements removed and new state of the art facilities built (the term “Storyland” had been dropped from the name in 1975). The renovation was paid for in part by the Valley Zoo Development Society, a registered charity and not-for-profit that was started in 1988 and which acts in partnership with the City of Edmonton to ensure the continued development of the Valley Zoo.

The file list was arranged by type of record.

This material was transferred to the City of Edmonton Archives between 1973 and 2015.

File list available online.
Photographs have been described at the item level; some are available on the online database, with the remainder available in the Reference Room.