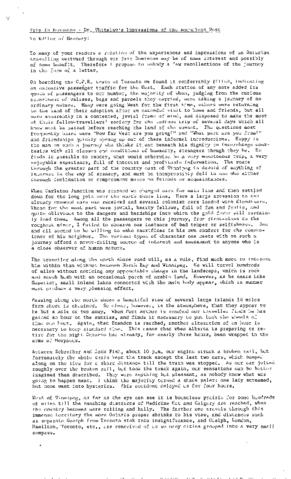 Dr. Thomas H. Whitelaw was born in Guelph, Ontario on September 23, 1867 to parents William and Isabelle (Henderson) Whitelaw as the eighth of nine children.

After graduating from the University of Toronto with a Bachelor of Arts degree in 1890 and a Bachelor of Medicine degree in 1894, Whitelaw opened a practice in Edmonton in 1898. In 1908, he was selected to become the Province of Alberta’s Health Officer, a position he held during the Spanish Flu epidemic after World War I until 1929.

Dr. Whitelaw died in 1943 and is interred in Guelph, Ontario.

Robin D. Whitelaw was a descendant of Thomas H. Whitelaw.
It is not known how Lottie Schaefer acquired the records.

The fonds consists of five letters written by Dr. Thomas H. Whitelaw and sent to periodicals based in eastern Canada. The narratives describe Whitelaw’s journey across Canada by rail and his perspective of the town during the closing days of the Klondike. Whitelaw also sets himself a vocal proponent of Edmonton by encouraging people to move west and take advantage of the growing community.

The photographs consist of an image of Main Street Edmonton (looking west in August 1898), an image of one of Edmonton’s mines, an image of mine workers, and a composite image of the Edmonton Y.M.C.A Maple Leaf Club membership from 1914 - 1915.

This fonds was donated to the City of Edmonton Archives by Robin D. Whitelaw in 1988 and Lottie Schaefer in 1991.