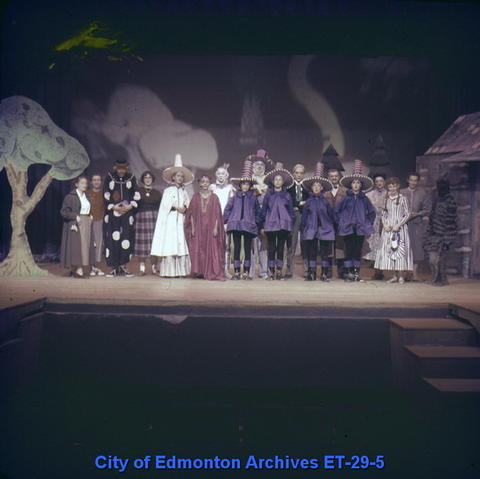 Cast, including Lloy Coutts as Dorothy; Moira McBride, Earlyn Deane, Marion Glen, and Judy Jones as the Munchkins; Alex Burton as the Scarecrow; Kenneth Kramer as the Guardian of the Gates; Christopher Hebb as Toto; Carol Rowe as the Witch of the North; Phillip Upright as the Tin Woodman; Mark Cohen as the Lion; Reta Stocks as the Witch of the West; Everett Oudkirk as the Wizard of Oz; Irene Elton as Glinda the Good; and Bill Bell as The Clown.
The play was held in the Victoria Composite High School Auditorium.

Title supplied means the title of the image was given by the creator of the work. Archivists keep those titles to provide context even though they may contain inappropriate or offensive language.