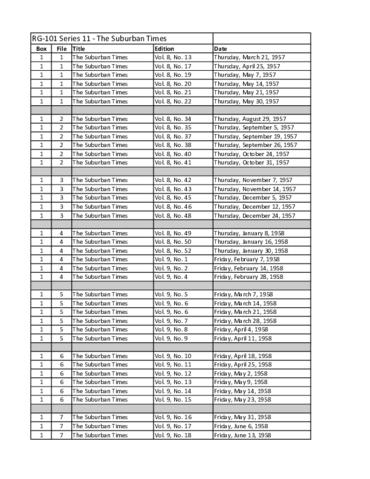 The "Suburban Times" was the creation of a group of Jasper Place businessmen in the 1950s. Jasper Place was once a separate town directly west of Edmonton. Douglas H. McLeod was a founding member of the paper, and three years after its formation, became its editor. Two years later he bought out the other shareholders and became the publisher as well. McLeod was president of the Jasper Place Chamber of Commerce and was a strong opponent of amalgamation with Edmonton in 1961.

These newspapers were delivered to the Town of Jasper Place town office. They were transferred to the City of Edmonton with the Town's administrative records after amalgamation with Edmonton in 1964.

The immediate source of acquisition is unknown.

The material was arranged by the Archivist in chronological order.

This material is fragile.