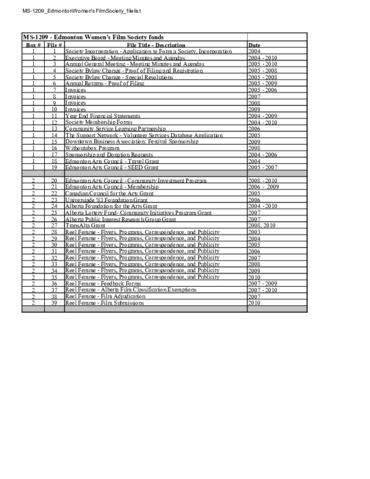 The Edmonton Women’s Film Society was a non-profit, incorporated society which operated from 2003 to 2010. The society aimed to bring together women of diverse backgrounds in order to promote women and self-determination through film. To accomplish this goal, the society held an annual film festival called Reel Femme, which showcased films directed, produced, and written by women. Each year, the Reel Femme film festival included a female celebrity guest speaker who would deliver a keynote address to kickoff the festival. The Edmonton Women’s Film Society often partnered with community organizations such as the Film and Video Arts Society (FAVA), May Week Labor Arts Festival, Herland Film Festival, and the University of Alberta to host film screening events. After hosting their 8th annual Reel Femme film festival, the Edmonton Women’s Film Society disbanded in 2010.

The material was arranged by the archivist.