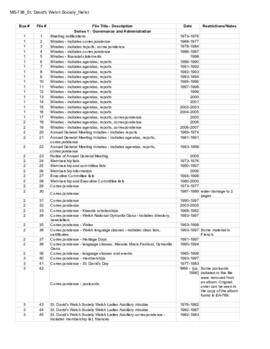 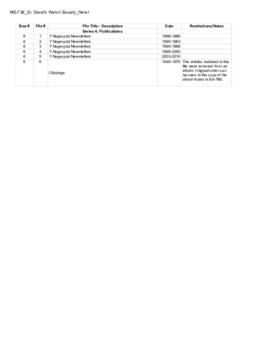 The St. David’s Welsh Society of Edmonton began with a small group of local Welsh in 1904 who would regularly gather to share songs, language, and literature. The small group, however, separated itself into two separate entities: the St. David’s Welsh Society and the St. David’s Male Welsh Voice Choir. The Society quickly grew and in 1931 had over 100 members. Early meetings included singing songs, parlour games, and Welsh food, such as Welsh cakes. The Society has participated in the Edmonton Heritage Festival since 1976 and hosts Welsh themed events, such as a banquet to celebrate the patron saint of Wales, St. David, and a bilingual Welsh/English hymn singing event, the Gymanfa Ganu. The Society built a cabin at the Devonian Gardens to commemorate David Thompson, a Welsh explorer, for all Albertans to enjoy. The Society also aims to provide assistance to various visiting and local musicians including, giving financial support to the Edmonton Opera Association and sponsoring a harp and vocal competition for youths. In its pursuit to support educational opportunities, the Society established the traveling Artist in Resident program for Edmonton and district schools, provided scholarships for the Kiwanis Festival, and bursaries for University of Alberta students studying history of the fur trade, vocal, and harp. The St. David’s Welsh Society continues to foster a community of Welsh heritage, language, and culture in Edmonton.

This fonds was donated to the City of Edmonton Archives by Vivien Bosley, Dilly Mitchell, Eluned Smith, and Jeremy and Glynys Hohmann in 8 donations made between 2006 and 2011.

Copies made of newspaper clippings, post it notes, and fading correspondence. Copy made of photo album. Panoramic photograph removed from backing.

Panoramic photograph has some creasing. A few pages of textual records have water damage.