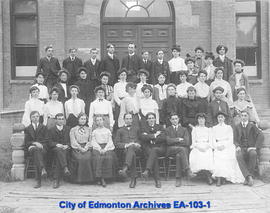 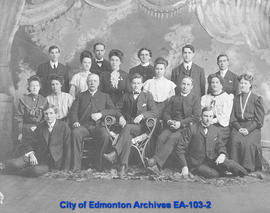 Robert H. Johnston was born 6 Jun 1879 to Mary Scott and Isaac Johnston in Lincoln, Ontario. He attended Harbord Street Collegiate in Toronto and graduated from Toronto University with Honours in Classics in 1900. The following year he attended the Ontario Faculty of Education.
Robert moved to Alberta where he secured a teaching position at the Edmonton High School. Robert taught at the school until about 1906, and then worked as a Dominion Land Surveyor for about ten years.
Robert married Barbara Dunlap, daughter of J.J. Dunlap in 1914, in Edmonton. They had two children. He returned to teaching in 1917 by joining the staff at McDougall High School where he taught mathematics and classics.
Robert H. Johnston died 21 Mar 1925, one day after being hit by an automobile. The accident was reported in The Edmonton Journal on March 23, 2915.

Mary Johnston is a descendant of R.H. Johnston in the records, most likely a grand-daughter.

This fonds was donated to the City of Edmonton Archives by Mary Johnston, via Maisie Hamilton, in 1969.

The photographs were assigned item numbers with the prefix EA-103.