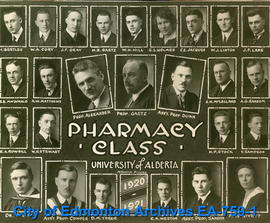 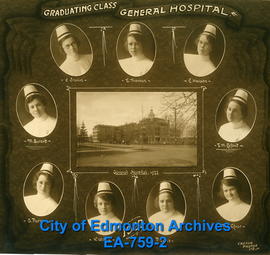 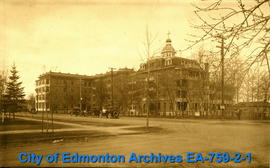 Rita H. Efner was born in 1901 in the United States. By 1916, she and her sister Elsie were living with their aunt and uncle, Alfred and Bessie Rehwinkel in Edmonton. Rita trained as a nurse at the General Hospital in Edmonton and graduated in 1922.
Walter Raymond Stewart was born 29 Jul 1890 to Sarah Little and William C. Stewart in Garden Hill, Ontario. Walter graduated from pharmacy at the University of Alberta in 1921. He married Jessie ? and worked in the Strathcona Military Hospital. Jessie Stewart died in 1922 and is buried in the Edmonton Municipal Cemetery.
In 1925 Walter Stewart married Rita H. Efner in Edmonton.
Walter worked at various drug stores including the Corner Drug store in the 1950’s. Following Walter’s retirement in the mid-1960s, Walter and Rita moved to Victoria, B.C.
Walter Raymond Stewart died 28 Jun 1970 in Victoria, B.C. A death date for Rita Efner Stewart cannot be found.

This fonds was donated to the City of Edmonton Archives by Rita Stewart in 1986.

The photographs were arranged by the archivist in chronological order and assigned item numbers with the prefix EA-759.