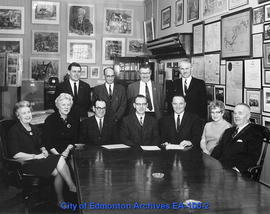 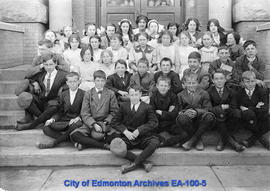 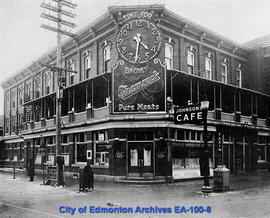 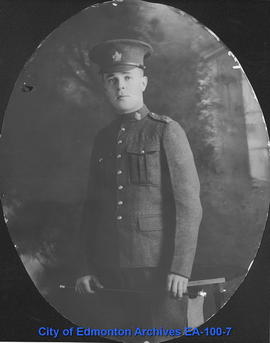 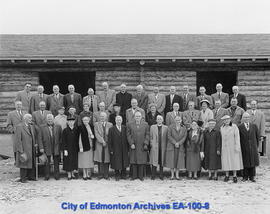 William Reginald ‘Reg’ Horner was born in Medicine Hat, N.W.T. on 22 Aug 1898 to William John Horner and Minnie Clarinda Smith. He moved to Edmonton as a child in 1905, where his father operated Horner’s Livery and Garage Co., Ltd. for many years. As a youth he was a private chauffeur and his clients included W.T. Henry, the Mayor of Edmonton.
He enlisted in the 196th (Western Universities) Battalion, C.E.F. on 20 Mar 1916 (regimental number 911333) and was soon overseas. When it was broken up as reinforcements, he was attached to the Signal Corps, 5th Battalion. He was awarded the Military Medal.
After the war, he farmed in the Horse Hill area (AB) until 1930 and then worked for the Northern Alberta Dairy Pool until his retirement in 1963. In 1964 he joined Weber Brothers Realty Ltd. He was active in veteran, Masonic and historical associations, including the Edmonton Historical Board.
He married Bessie Wilkinson, daughter of George Almer Wilkinson and Phoebe Belle Reynolds, on November 11, 1920 and they had four children. Reginald Horner died 24 Sep 1980.

The fonds consists of clippings, booklets and correspondence from Reg’s military career and an autobiography.
The photographs are of various groups, including the Rotary Club, Edmonton Historical Board, Northern Alberta Pioneers and Old Timers Association, Northern Alberta Diary Pool Social Club, McKay Avenue School and of the Selkirk Hotel.
The books include Tony Cashman’s “A Moving Story” (388.3 CAS) and “Memories Of A Pioneer Schoolteacher” by Maisie Emery Cook (923 COO).
File List:
File 1:

This fonds was donated to the City of Edmonton Archives by Reginald and Bessie Horner in five donations made between 1970 and 1985.

The material was arranged according to the filing system of the creator.
The photographs were assigned item numbers with the prefix EA-100.

See ‘Scope and Content’ above.
Photographs have been described at the item level and are available in the Reference Room and online database.