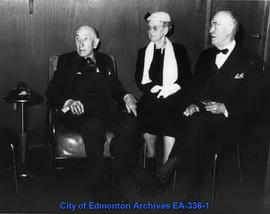 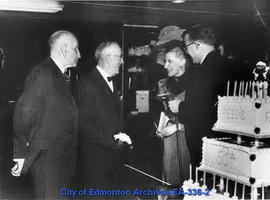 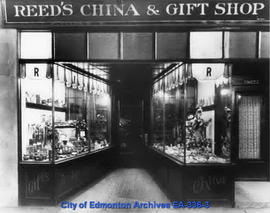 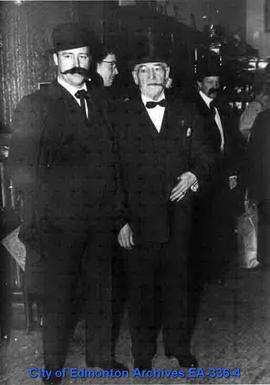 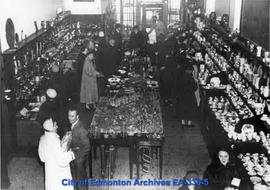 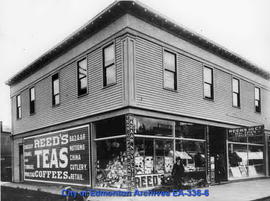 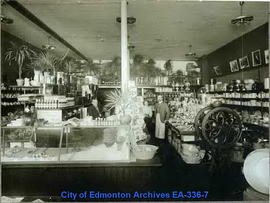 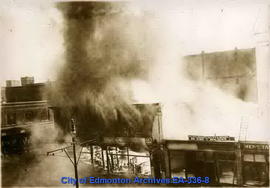 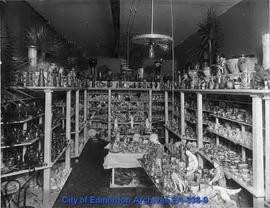 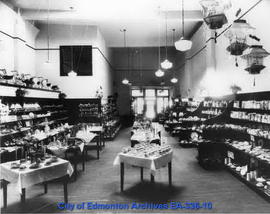 William Henry Reed was born in Kingston, Ontario in 1870. By 1884 he was working at Stroud’s Bazaar store in Belleville, Ontario, working his way from junior clerk to salesman to manager in 1897. William Reed married Alice Clarke on 19 May 1898 in Belleville, Ontario. They had 4 children, Florence, Nora, George and William. William Reed died in 1957 and is buried at Edmonton Cemetery.

Russell Francis Clarke was born in Belleville, Ontario in 1885. As a young man he worked as a stable boy in a livery. In 1905, at age 20, he decided to follow his brother-in-law, William Reed, to Edmonton to open a business. He married Clara Knapp, from Kingston, in 1912. They had 3 children, Phyllis, Dorothy and Robert. Russell Clarke died in 1967 and is buried at Edmonton Cemetery.

In 1905 William Reed decided to leave Stroud’s Bazaar in Belleville to strike out on his own and travelled to Edmonton to start a business. He rented space in the Lee Block (Jasper Avenue and 102 Street) in September 1905 and returned to Ontario to make permanent arrangements for the move west the following month with his family, including his brother-in-law Russell Clark.

William Reed and Russell Clarke opened ‘Reed’s Tea and Bazaar’ on Saturday 25 Nov 1905. William Reed was the proprietor and wholesaler while Russell Clarke was the retailer and manager. The novelty store offered ‘all the fun of the fair’ and ‘all the bargains of the bazaar’ selling tea, coffee and all manner of household goods (ex: glassware, crockery, kitchenware, bric-a-brac, camp-stoves, washtubs). Reed’s was the first store in Edmonton to operate a coffee roasting plant. By 1910, the store included a ‘Tea Room’.

In 1912 plans were being made to demolish the 2-storey Lee Block (by then called the Brown Block) and replace it with a 10 storey building. William Reed had received notice to vacate the building when his lease expired 1 Apr 1913. Reed’s had several clearance sales in preparation of leaving the Lee Block.

However a fire on 11 Jan 1913 completely destroyed the Lee Block (Brown Block) building, including Reed’s Tea and Bazaar with Reed’s losing approximately $15,000 worth of contents in the store.

At the time of the fire Reed had already secured a new locale for his store, at 324 Jasper Avenue (previously the Blowey-Henry store, named “The Fair”). Reed’s reopened with the name Reed added to the existing sign and the store became known as Reed’s Fair.
In 1917 the store relocated to 10321 Jasper Avenue and was called Reed’s Bazaar again.

In 1927 Reed’s Bazaar moved again, next door into the former movie house, the Regent Theatre at 10325 Jasper Avenue. As the store now specialized in fine glassware and china, it was renamed “Reed’s China and Gift Shop” and started Edmonton’s first bridal registry. It was at this time that the store’s trademark, dark blue gift boxes with Reed’s crest in gold, was developed.

In 1950 Robert Mason Clarke, son of Russell Clarke, returned from military service and joined the store, replacing William Reed who retired in 1947. The Clarke father and son team were the owners of the store until Russell Clarke’s retirement in 1960. Robert Clarke remained as owner of the store.

Reed’s Fine China and Gifts celebrated its 50th anniversary in 1955 with a C.J.C.A broadcast of the anniversary party, which included both founders William Reed and Russell Clarke. Reed’s purchased Burrows China Ltd in Calgary in 1955 and renamed the store Reed’s.

In 1965 Reed’s China and Gift shop celebrated its 60th anniversary with Russell and Robert Clarke. The 75th anniversary of the store was in 1980 with Robert (Bob) Clarke and his sisters, Dorothy Byar and Phyllis Main, in attendance. In 1985, the store’s 80th anniversary, it was considered the second oldest retail business in Edmonton.

Business declined in the late 1980s. In 1990, Robert (Bob) Clarke retired and the three remaining Reed’s China and Gift stores were sold to businessman Jim Cassells of Victoria, British Columbia.

The fonds consists records and photographs created or accumulated by the Reed or Clarke families of Reed’s Fine China and Gifts.
The photographs include interiors and exteriors of Reed’s stores as well as photos of William Reed, Russell Clarke and some members of their families and staff.
Item List:

This fonds was donated to the City of Edmonton Archives by Robert (Bob) Mason Clarke in 1978 and 2000.

The photographs were assigned item numbers with the prefix EA-311.