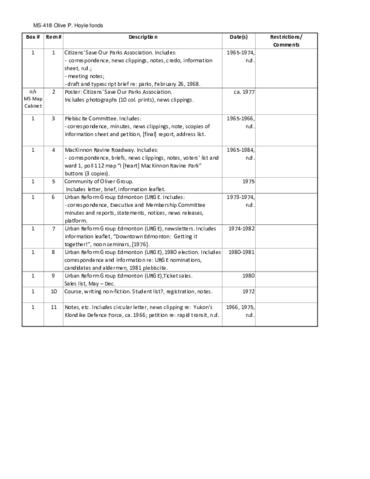 Olive Porter was born in Edmonton in 1914 to David and Katherine Porter.
She married Alastair W. Holye around 1941. Olive and Alastair lived in Edmonton's Crestwood community, south of MacKinnon ravine, from ca. 1942. She was employed as a clerk/stenographer in various Edmonton businesses from 1942 until her retirement in 1982.
Olive Hoyle was active in the establishment of the Citizens' Save Our Parks Association in 1965, which opposed the use of Edmonton's river valley ravines for roadways, particularly the Quesnel and Capilano ravines in East Edmonton and the MacKinnon Ravine in the west. As part of its campaigns, the association co-operated with a number of other community organizations, including the Edmonton Civic Rights Association, the Alberta Voters Organization, the United Voters Association, the Local Council of Women, East End Ratepayers and West End Ratepayers, to form a Plebiscite Committee, which organized a successful petition to force a plebiscite on the construction of the 72nd St. Bridge [later Capilano Bridge]. Personally and with a number of opposition groups, she also opposed construction of the MacKinnon Ravine roadway (also known as the Jasper Freeway) until its final abandonment in 1983.
Olive Hoyle was a founding member of the Urban Reform Group Edmonton (URGE), a civic political party, and served on its first Membership Committee, 1973-1974.
Olive Porter Hoyle died in Edmonton in 1991.

Alastair Hancock was a nephew of Olive P. Hoyle.

This fonds was donated to the City of Edmonton Archives by Alastair Hancock in 2006.

The material was arranged by the archivist based on creator.

The majority of documents in this fonds were intermingled with a large quantity of newspapers, news clippings and periodicals. Groups of documents, which had content and/or date range relationships, have generally been retained and described together.
Other material existed in two specific files (one concerning Citizens' Save Our Parks Association, the other the Plebiscite Committee). The arrangement and description of these files is based on how the papers related to the creator's personal and organizational roles. For material of Olive Hoyle's involvement in the campaign opposing the MacKinnon Ravine roadway, it is unclear what material may document her participation in groups and what expresses her personal interventions.