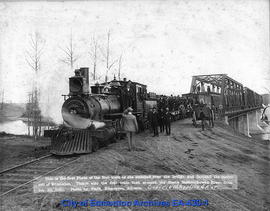 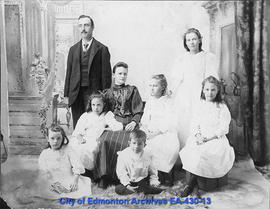 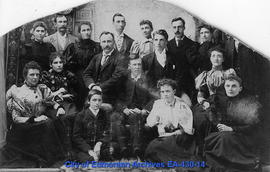 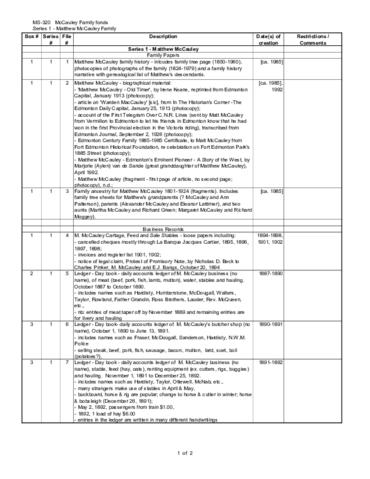 Matthew McCauley was born 11 Jun 1850 to Eleanor Latimer and Alexander McCauley near Owen Sound, Ontario. Matthew first moved to Winnipeg in 1874, then to Fort Saskatchewan in 1879, and to Edmonton the following year.

In 1881, Matthew McCauley opened a butcher shop and a livery/cartage business. By 1890, he was no longer in the butcher business and the livery/cartage business became known as the M. McCauley Cartage, Feed and Sales Stables, eventually becoming the Edmonton Cartage Company. It was the only livery, cartage and stable business in Edmonton for many years and became an important part of Edmonton’s business scene. The livery was a both a stable where horses and teams could be hired and a stable for boarding privately owned horses. The cartage company was noted for hauling large heavy loads, including being known for bringing the first piano to Edmonton. Matthew McCauley sold the business in 1902.

Matthew McCauley was very involved in the community in early Edmonton. He organized Edmonton’s first public school in 1884. He was a founding member of Edmonton’s school board and served on it for 18 years. When Edmonton was incorporated as a town in 1892, he was elected Mayor by acclamation. He secured a charter from Ottawa for a municipal railway system – the first west of the Great Lakes. He was re-elected as mayor in 1893 and 1894.

In 1905, when Alberta became a province, he was elected to the first provincial legislature as a representative for the Vermilion area. He was a member of the provincial legislature until he was appointed as the Warden for Alberta’s first penitentiary. Matthew served as Warden from 1906 to 1911. He retired to Penticton, B.C. in 1912 to take up fruit farming. He returned to Edmonton in 1925 purchasing a 1000 acre farm in the Peace River District.

Matthew McCauley died 25 Oct 1930 at the age of 80 in Sexsmith, Alberta, and is buried at the Edmonton Cemetery.

Margaret Wood is the daughter of Alexander J.H. McCauley and the granddaughter of Matthew McCauley.

Elizabeth Aylen is the daughter of Julia Alberta McCauley Norquay and the granddaughter of Matthew McCauley.

It is not known how Tony Cashman acquired the records.

The business records are for Matthew McCauley’s butcher shop and cartage businesses. The ledgers list the daily transactions or general accounts of the businesses, which include the names of many (now well known) Edmonton families and the costs of the material, product or service provided (ex: hay, meat, livery, hauling and cartage).

The photographs include the first train across the North Saskatchewan River, Matthew’s children, and the First Presbyterian Church Choir.

This series was donated to the City of Edmonton Archives in six donations between 1971 and 1992 made by descendants of the Matthew McCauley (Margaret Wood, Elizabeth Aylen, and Marjorie van de Sande), and one donation made in 1998 by Tony Cashman.

The material was arranged by the archivist by type of record, then by date.