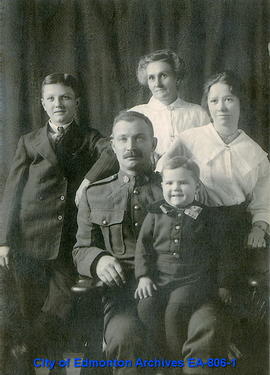 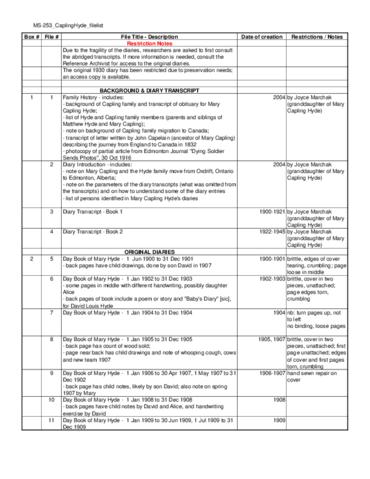 On 25 Apr 1900 they moved to a farm in Oxdrift, in northeast Ontario. Mary began keeping a diary on 1 Jun 1900 in which she recorded events about the family, friends and neighbourhood.

In spring of 1910 they sold their farm and Matt took their stock (cows and horses) to Swift Current, Saskatchewan. Mary and her children, Alice and David, went to be with Mary’s parents in Tavistock, Ontario while Matt was away. The family was separated for 9 months. The separation was a great strain on Mary and she did not write in her diary during this time. Also during this time she gave birth to her third child, Johnny, on 21 Jul 1910 in Tavistock. Johnny Hyde died six months later on 16 Jan 1911, due to infantile paralysis (polio). The family was reunited when Matt returned from Saskatchewan. He gathered his family from Tavistock in March 1911 and they returned to Oxdrift. At this time, they decided to move west to Edmonton.

On 16 Apr 1911, the family left Oxdrift by car and arrived in Edmonton on 29 Apr 1911. They first stayed at the Waverly Rooming House (on Fraser) and a few days later moved to their own home at 11740 – 83 Street (originally known as 676 Johnston). The family settled into life in Edmonton. In the diary entry for 9 Apr 1914 Mary noted there were many children, including 16 babies, at the Children’s Shelter. On 14 Apr 1914 Mary welcomed a fourth child, baby Robert Deane (Robbie) from the Children’s Shelter, into her family.

On 7 Jul 1915, Matt enlisted in the Canadian military and became a Private in the 66th Overseas Battalion (100562). Matt trained in Calgary with the 66th Battalion from August to November 1915 and then returned to Edmonton. On 21 Apr 1916, the 66th Battalion left Edmonton by train. They departed from Halifax aboard the S.S. ‘Olympic’ on April 28, 1916.
Matt was killed in action in northern France, likely near Courcelette, on 26 Sep 1916 during the battle for the Schwarn Redoubt on the Somme Front. As he dies on the field, he handed a small wallet to a fellow soldier with instructions that the photos inside be sent home to Edmonton. That soldier was also killed but the photos were passed on through many hands, eventually reaching the Chaplain of the Battalion, who sent them to a contact in Edmonton. However the contact in Edmonton did not recognize the photos so she forwarded them to the Edmonton Journal. The Edmonton Journal published one photograph (30 Oct 1916) with the headline ‘Dying Soldier Sends Photos; Recipient Now Seeks Owner’ and it was recognized by the Hyde family.

Mary and her family remained in Edmonton. Alice Hyde married Edward (Eddie) W. Cyre in 1919 in Edmonton. They moved to a farm in Vegreville and had five children – Hazel, Verda, Yvonne, Bill and Joyce. David Hyde did not marry but also farmed in the Vegreville area. David Hyde died in 1975. Robbie (Bob) Hyde married Midred L. Kerswill in 1937 in Edmonton and they had two daughters, Marion and Marlene. Bob was a Corporal in the Canadian military for many years and served overseas. Bob returned to Edmonton but later retired to British Columbia.

Mary Capling Hyde died 14 Mar 1945 and is buried at the Beechmount Cemetery. Matthew Hyde’s name is on the Vimy Memorial in France.

Joyce Marchak is the granddaughter of Mary Capling Hyde.

This fonds was donated to the City of Edmonton Archives by Joyce Marchak in 2002.

The material was arranged according to the filing system of the creator.
The photograph was assigned item numbers with the prefix EA-806.

Some files are restricted due to conservation.

Several diaries are fragile - handle with extreme care - see file list.
The 1930 diary survived a fire but was damaged and is extremely fragile; it has been reproduced for access purposes.