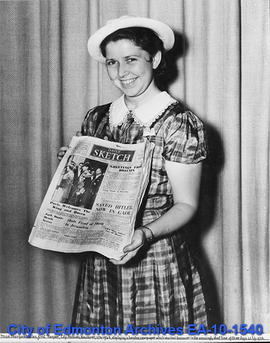 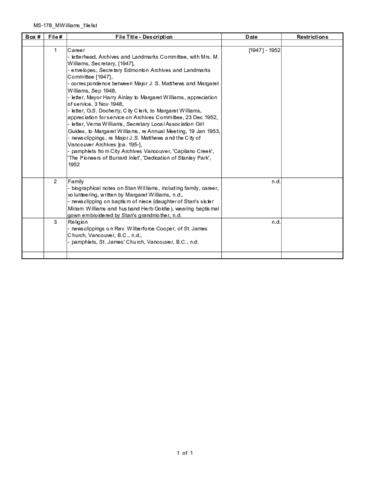 Margaret Amy Lucy Giles was born 2 Feb 1916 to Fannie Davies and Edwin Henry Giles in Edmonton, Alberta. In 1932 Margaret started working in Vancouver at the fledgling City of Vancouver Archives, as an assistant to the City Archivist, Major James S. Matthews. She worked at the Vancouver Archives until 1942.

In 1943, Margaret and Stanley moved to Edmonton, where Stan got a job with the Edmonton Bulletin, and later the Edmonton Journal. Though Margaret continued to have a strong interest in the Vancouver Archives and St. James Church in Vancouver where she married, she was also very active in the Edmonton community. She served on many committees and volunteered for numerous groups and charitable organizations. She was dedicated to Guiding and Scouting, initially as a member and later becoming a leader in my branches, including Brownies, Wolf Cubs, and Guides. She served as Commissioner of the Highwood District for many years.

Margaret and Stan were very involved with church activities, including pioneering a newspaper recycling project at St. Barnabas Anglican Church. One of Margaret’s proudest achievements was receiving a lifetime membership in the Anglican Church Women.

Margaret and Stan co-authored a travel series in the Edmonton Journal newspaper, where her husband was an associate editor. Their first destinations were reached by road pulling their trailer, earning them the title of ‘Six Wheels’. Margaret was also very involved with St. Peter’s Anglican Church. Stan and Margaret received a Recognition Award from the Edmonton Historical Board in 1976.

Margaret Giles Williams died in Nov 1994 in Mayerthorpe, Alberta, and she is buried at the Beechmount Cemetery in Edmonton.

This fonds was donated to the City of Edmonton by Margaret Williams through the Northern Alberta Pioneers & Old Timers Association.

The material was arranged by the archivist by subject.
The photograph was assigned the prefix EA-10.

See also:
Major Matthews collection (AM54) at the City of Vancouver Archives