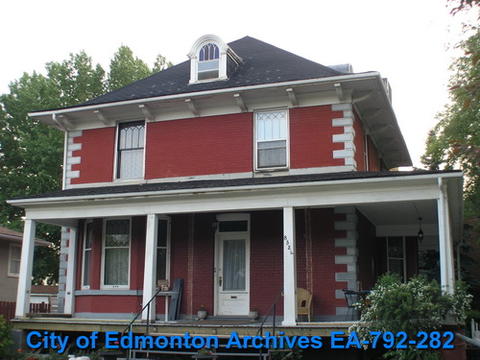 8324 - 106 Street.
Margaret Martin, a widow, owned a 320-acre farm on this site at the turn of the 20th century. In 1899 Margaret and her husband, David, left their North Dakota home to settle in the Canadian North West. David set off with livestock and farm machinery in April to secure the land, and Margaret followed in July with their eleven children. Sadly, one small daughter died of pneumonia shortly after they arrived. Eighteen months later, David died of the same illness. The family buried both loved ones on their farm, at what is now Mount Pleasant Cemetery.
Margaret commissioned the architectural firm of Magoon, Hopkins and James to design this Foursquare, Prairie-style home in 1907. The firm later became Magoon and MacDonald Associates that built the Metals Building, Tegler Building, McDougall United Church, Salvation Army Citadel, St. Stephen's College, and other Edmonton landmarks.
The Martin family moved into what was then 18 Second Street West, Strathcona, the only house on the west side of the street until 1910. The remaining area of Martin Estates, the name given to the newly subdivided farmland, eventually became the communities of Pleasantview and Parkallen.
Margaret died in 1940, leaving the home in her daughter Edith’s care. The Martin children created their own legacy in Edmonton. Grace Martin McEachern became a well known school teacher. Helen Martin married Cecil Rutherford, the only son of Alberta's first premier, A.C. Rutherford. David Quincy Martin worked for thirty years with the Alberta Liquor Control Board after marrying Lova Shaw, daughter of H.V. Shaw, proprietor of Edmonton Cigar Factory.