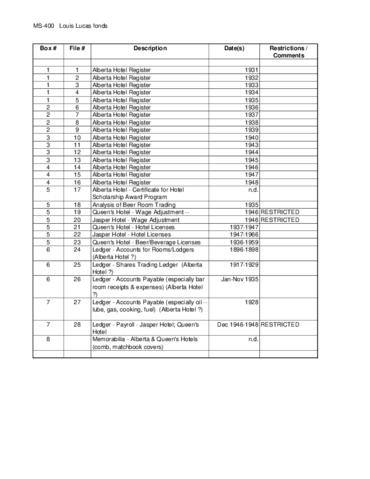 Louis Lucas was born 25 Aug 1894 in the Ukraine. He came to Canada about 1910.
He married Helen Schultz in Edmonton in 1925. They had two children, Thelma and Gordon. Mr. Lucas built a career in the hospitality industry, first working in a restaurant on 101 St, near the Empire Block, then owning the Louis Waffle Shop on Jasper Avenue from 1927 to 1934. In 1935 he became manager of the Alberta Hotel and by 1940 he was manager at both the Alberta Hotel and Queen’s Hotel. In 1950 Louis purchased the Alberta Hotel and Queen’s Hotel, forming the Jasper Hotels Ltd. Company. Louis Lucas died 13 Jan 1955 in Edmonton and is buried at St. Joachim’s Cemetery in Edmonton.

The first Alberta Hotel was built in 1898 on the corner of Fraser and Jasper Avenue. In 1903 a new, four storey, sandstone and brick structure was erected on the same site. It boasted all the modern amenities including the first elevator and shower baths in Edmonton. Prime Minister Laurier stayed there during the inauguration ceremonies for the province in 1905.
After Louis Lucas’s death in 1955, the Alberta Hotel remained in the hands of the Lucas family until the 1980s. After protracted attempts to preserve the landmarks failed, both hotels were demolished in the early 1980s to facilitate development on Jasper Avenue. The Alberta Hotel was dismantled and put into storage for later reconstruction on another site.

Laurie (Lucas) Hoffman is the daughter of Gordon Lucas, granddaughter of Louis Lucas.

This fonds was donated to the City of Edmonton Archives by Laurie Hoffman in 1990.

The material was arranged by the archivist in chronological order.

Some files are restricted due to protection of privacy.