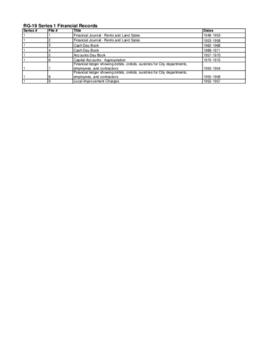 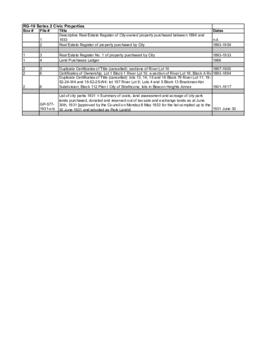 The Land Department was created in 1921 to take care of property acquired by the City through the Tax Recovery Act, whereby the non-payment of taxes would lead to the forfeiture of one's property to the municipality (prior to 1921 this function was undertake by the Assessor's Department). Due to massive land speculation prior to the dramatic recession of 1913, there were many such lots. In 1931 the City held the titles of approximately 50,000 lots, mainly in the outer zone, however the City only owned around 300 buildings. The lots and buildings were in some cases rented out, and at the time the City had a total of 1,015 tenants.

The duties of the department included negotiating sales, attending to enquires at the service counter, renting land for cultivation purposes, billing for and collecting rents, issuing notices for transfers, all the work necessary in keeping buildings in good repair, and all the different transactions relative to a real estate business.

In 1952 the department was responsible for records of city owned property; purchase, exchange, sale or expropriation of property for the City as directed; and selection of tenants, collection of rents and maintenance of City owned rented property.

In 1957 the Land Department was dissolved to create the Land and Industrial Development Department, which lasted until 1959 when the responsibilities were divided once more. The Land Department was re-established and combined with the Market and Emergency Housing Bureau, making the department responsible for operation of City Market, weigh scales and comfort stations, and the provision of emergency housing.

There were minor changes to the departmental structure every few years in the 1960s. In 1962 an Accounting section was added to the existing sections of Replot and Negotiations, Office and Sales, and City Properties. In 1964 the City Properties section was renamed the Rental and Property Management section, and by 1968, though their functions remained largely the same, all of the sections had been renamed: Negotiations Division, Land Sales and Office Division, and Rental and Property Management Division.

This material was transferred to the City of Edmonton Archives between 1965 and 1993.

The photograph was assigned the prefix EA-8.

The photograph (EA-8-1) is a street scene taken April 27, 1954 by Les Stephens. In the 1970s or 1980s it was removed from the textual records and described in isolation. The records from which it came (A75-136 - general correspondence) have yet to be processed, therefore the photograph is not currently part of a series.