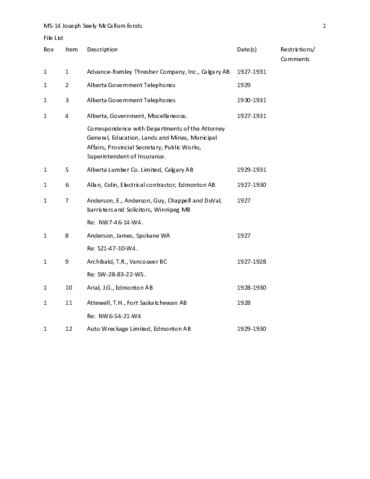 Joseph Seely (or Seeley) McCallum was born 9 Jul 1884 to Jane Seeley and Angus McCallum in Renfrew, Ontario. At some point the family settled in Mundare, AB, where other members of his family lived and operated the McCallum Garage. Joseph began real estate operations there and in Edmonton around 1920. His company McCallum Agencies, formed ca. 1927, dealt with real estate, farm lands, insurance, real estate investment and rentals. He also operated McCallum Motors, dealing in Studebaker and Erskine cars, ca. 1928. By 1932 Mr. McCallum appears to have gone bankrupt and he reverted to working as a real estate agent for a local firm, as manager of the Raymond Hotel and an appraiser/collector for the Canadian Farm Loan Board until about 1945.
Joseph Seely McCallum married Catherine Elizabeth? in 1905. They had three children – Bessie, Angus and Randolf.
Joseph Seely McCallum died 22 Jul 1945 in Edmonton.

It is unclear how the City of Edmonton Archives acquired the records.

The fonds consists of records created by Joseph McCallum including correspondence, legal papers, bills and invoices relating to his businesses, particularly McCallum Agencies and McCallum Motors. The records offer a view of commerce during the late 1920s and early 1930s. A great deal of the correspondence reveals the effects of the Great Depression on business, being composed of demands for overdue payment, and letters to and from lawyers and collection agencies concerning outstanding debts.

The material was arranged by the archivist in alphabetical order.