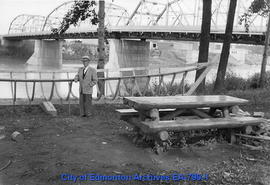 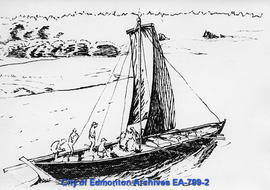 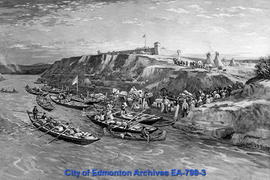 John Wallis Sherwin was born in 1873 in England. He emigrated to Canada in 1905. In 1906, John married Julia C. Hammond in Winnipeg, Manitoba.
By 1921, John and Julia were settled in Edmonton with their seven children – Julia W., Joan, John D., George H., Frances M., Richard W. and Kenneth.
John W. Sherwin worked as an insurance agent, manager and later was Secretary, then President of the Edmonton Land Company until his retirement.
John was a strong advocate for the preservation of Edmonton’s history with a particular interest in York boats.
John W. Sherwin died 8 Sep 1964 and Julia C. Sherwin died 9 Feb 1979. They are buried at the Mount Pleasant Municipal Cemetery.

The fonds consists of blueprints, images and research notes on York boats, covering the period 1810-1825, created and collected by Mr. Sherwin.
File List:

The material was arranged according to the filing system of the creator.
The photographs were assigned item numbers with the prefix EA-799.

This MS was formerly Miss M.E. Thompson fonds - that record (a brochure) has been repatriated to the Clipping files (Alberta Legislature Building).