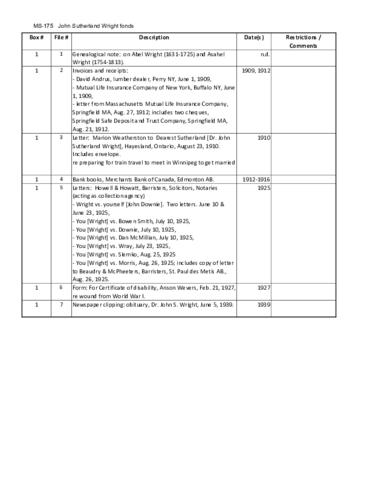 The family of John’s great-grandfather, Asahel Wright (1754-1813), was caught in the American Revolution. The loyalties were divided in the family. Asahel and some sons sided with the British and went to Canada, where they received some land grants in return for their loyalty. Asahel’s other sons remained in the New England, U.S.A. area.
John is a descendant of the branch of the family that went to Ontario and became farmers in the Township of Sullivan area, Grey County, Ontario.
In 1891, John lived in Manitoulin, Ontario and worked as a school teacher. He married Matilda Dawson on November 16, 1891 in Little Current, Ontario. Their daughter, Helen Walker Wright, was born October 10, 1895, in Toronto, Ontario while John was a medical student.
John, Matilda and Helen moved to the United States in 1897, settling in the town of Lysander, New York. Sometime between 1901 and 1910, Matilda died and, John and Helen returned to Canada.
In 1910, John opened a practice in Edmonton, Alberta on Jasper Avenue. In 1911, he moved his practice to the Stovel Block, at 423 Namayo Avenue (later known as 10329 - 97th Street).
John married Marion Georgina Weatherston, from Hayesland, Ontario, on August 31, 1910 in Winnipeg, Manitoba. John’s practice remained at the Stovel Block and the family, John, Marion and Helen, lived in the same building. By 1916, Helen Walker Wright was a teacher at McCauley School and still lived with her father and stepmother at 10329 – 97th Street.
In 1924, John moved his practice to the Tegler building at 10189 – 101 Street, and the family moved to 10152 – 115 Street. His practice remained in the Tegler building until he retired in 1938.
Helen Walker Wright married Wilmer Gerald Grothier, a bank clerk, on May 5, 1921 in Toronto. They had two children. Helen Walker (Wright) Grotheir died December 3, 1931 in Woodstock, Ontario.
Marion Georgina (Weatherston) Wright died ca. 1929.
Dr. Wright died In Edmonton June 5, 1939 and is buried in the family plot in Perry, New York, U.S.A.

It is not known how the Northern Alberta Pioneers and Old Timers Association acquired the records.

This fonds was donated to the City of Edmonton Archives by the Northern Alberta Pioneers and Old Timers Association.

This MS was formerly Esther A. J. Clark fonds - those records have been repatriated to MS-22 Esther A.J. Clark fonds.
The records of John Sutherland Wright were formerly known as MS-56.1.