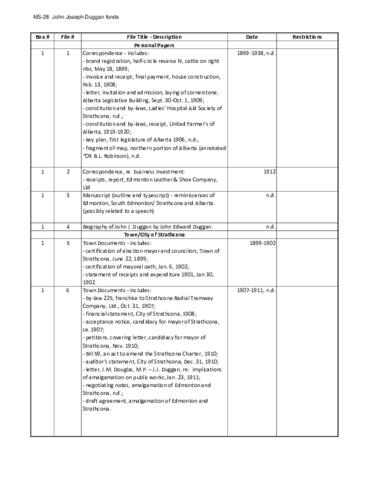 John J. Duggan was born 16 May 1868 near Fenelon Falls, Ontario, the third generation in Canada of an Irish immigrant family. In 1891 he moved to Strathcona and established a lumber yard. He was a member of the first council of the Town of Strathcona in 1899, and served two periods as mayor, 1902-1903 and 1908-1910. During the second period he participated in negotiations for the amalgamation of Edmonton and Strathcona. In 1906 Mr. Duggan purchased a half section of farmland south of Strathcona, adding an adjacent parcel in 1929. This land later became known as the subdivision of Duggan. He married Margaret Belle (Maggie) McDonald, on 5 Feb 1894. They had two sons, Neil and Jack.
John J. Duggan died on 1 Dec 1952 in Edmonton.

John Edward Duggan is the son of John Joseph Duggan. It is not known how portions of the fonds became associated with the Northern Alberta Pioneers and Old Timers Association.

This fonds was donated to the City of Edmonton Archives by John Edward Duggan between 1970 and 1982, and also by the Northern Alberta Pioneers and Old Timers

The material was arranged by the archivist by subject.
The photographs were assigned item numbers with the prefix EA-107.

Some of the records were formerly known as MS-56.7