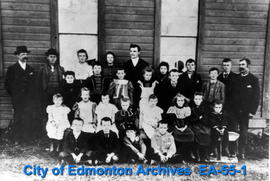 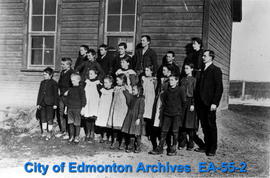 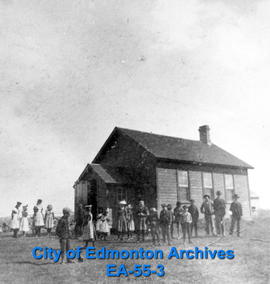 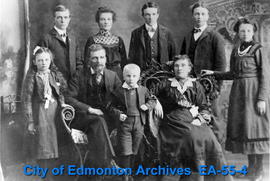 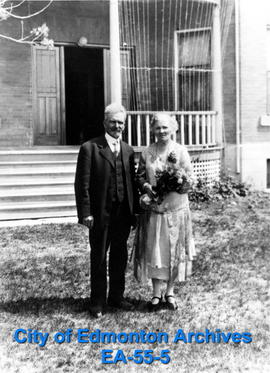 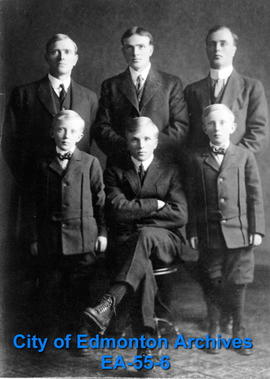 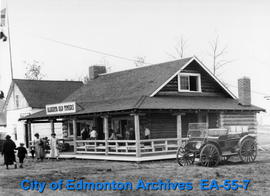 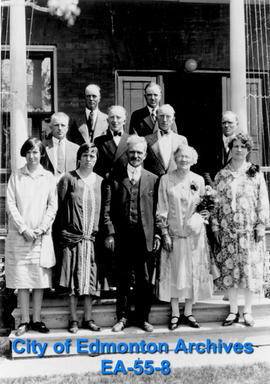 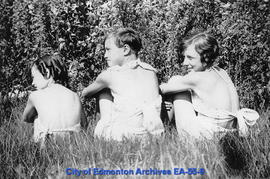 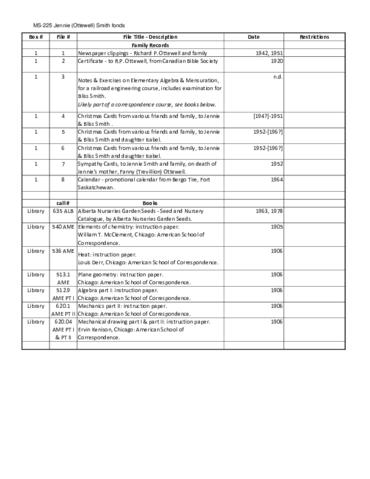 Richard P. Ottewell was born in Lincolnshire, England and came to Canada as a very young boy with his parents, settling in Middlesex County, Ontario, ca. 1852 and then moving to Bruce County, Ontario in 1867. He married Frances (Fanny) Dingle Trevillion on June 7, 1877 in Port Arthur, Ontario. Richard worked in the Duncan Mine. Two children arrived in quick succession, William John (born 1880) and Frances Ella (born 1881). Around this time, Richard read an editorial in “The Bulletin” newspaper, written by Frank Oliver describing the Edmonton area and decided to move west.
Leaving his wife and two children in Ontario, he set out in 1881 from Port Arthur to Duluth by boat, then to Winnipeg by train, then to Edmonton with two horse teams and a wagon. Richard Ottewell staked his claim on August 7, 1881, in the Clover Bar area – then some 10 miles east of Edmonton. Once the homestead was broken and the land cultivated for farming grain, he sent for his family. His wife, Fanny, and children William and Ella, joined him in Edmonton in 1883.
A sod house was replaced by a log house, which was eventually replaced by a large brick house in the early 1900’s. The original log house was restored and placed in Fort Edmonton Park. The Ottewell family eventually turned from grain to dairy farming. Richard Ottewell died in 1942, but his youngest sons continued to farm the land until 1951.
The Ottewell farm was considered one of the finest in the areas and Richard was considered a driving force in the Clover Bar community. He helped to organize the Clover Bar School District, opened the Ottewell Coll Mine and the Campbell & Ottewell Flour Mill.
Richard and Fanny had 9 children in total - William John (1880-1976), Frances Ella (1881-1971), Arthur James (1884-1979), George Garnet (1886-1979), Jane Elizabeth ‘Jennie’ (1892-1985), Muriel (1894-1964), Cedric (1896-1950) and twins Frank Clinton (1905-1967 and Frederick Samuel (1905-1965).

It is assumed, though not confirmed, that Melanie Moore is a descendant of the Richard P. Ottewell family.

This fonds was donated to the City of Edmonton Archives by Jennie Ottewell Smith (Mrs. Bliss Smith) in 1968 and 1979, and Melanie Moore in 1996.

The material was arranged by the archivist based on creator (family branch).
The photographs were assigned item numbers with the prefix EA-55.