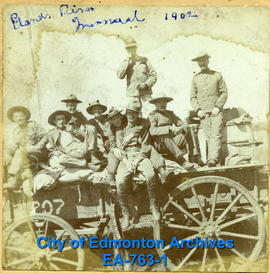 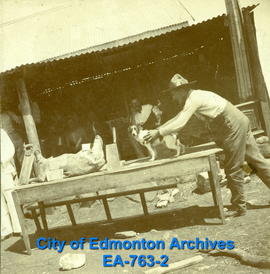 James Winterbottom Taylor was born 17 Dec 1877 to Mary Anne Winterbottom (1849-1886) and Richard Ratcliffe Taylor (1849-1911) in Walsden, Lancashire, England. He came to Canada with his parents about 1888. They settled at Middlechurch, Selkirk County near Winnipeg.
He joined the 90th Rifles of Active Militia of Canada in Winnipeg on 27 Mar 1900 and served until 2 Mar 1901 when he was transferred to the South African Constabulary. The recruited division left Canada on 26 Mar 1901, sailing on the troop ship Montfort with 1,283 Canadians on board. The ship arrived into Table Bay, in Cape Town, South Africa at midnight on 26 Apr 1901.
James Taylor saw action in the South African conflict (also known as the Boer War) in the Krugersdorp area and served in Lord Robert Baden-Powell’s police escort. He continued serving in the Constabulary after the peace treaty was signed on 1 Jun 1902. He was honourably discharged on 13 Feb 1903 and returned to Canada.
He married Frances Winnifred DeLong on 27 Sep 1907. He applied for a land grant for Canadian South African Service in 1908, eventually homesteading in the Red Deer area. They had 8 children (6 sons and 2 daughters).
James W. Taylor died at Castor, Alberta on 12 May 1958.

Mrs. H. Fox is the daughter of James W. Taylor.

The fonds consists of records of James Taylor’s military career:

This fonds was donated to the City of Edmonton Archives by Mrs. H. Fox, daughter of James W. Taylor.

The textual material was arranged by the archivist in chronological order.
The photographs were assigned item numbers with the prefix EA-763.