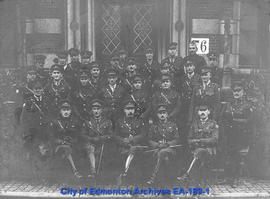 James T. Neilson is a lawyer and partner with Parlee McLaws, Barristers & Solicitors in Edmonton. He was educated at Trinity College, University of Toronto (1976) and Osgoode Hall Law School, York University (1979). He has practiced in the area of civil litigation since 1981. James is past president of the Edmonton Bar Association and serves on committees with the Law Society of Alberta. He was appointed Queen’s Council in 2010. James has also been active in various Edmonton community groups including the Edmonton Community Foundation, Big Brothers Association of Edmonton and District, and the Edmonton Historical Board.

James Neilson purchased the photograph in an eBay auction in 2002.

The fonds consists of a photograph of the Officers of the 49th Battalion, Edmonton Regiment taken one day after the armistice of WWI (November 11, 1918).
The 49th Battalion, Edmonton Regiment, CEF, was authorized in November 1914 under the command of Lt. Col. W.A. Griesbach and embarked for England in June 1915. The troops went to France in October 1915, where they fought as part of the 7th Infantry Brigade, 3rd Canadian Division in France and Flanders until the end of the war. The battalion was disbanded September 1920.

This fonds was donated to the City of Edmonton Archives by James T. Neilson in 2002.

The photograph was assigned item numbers with the prefix EA-189.