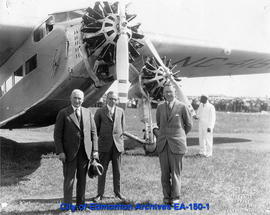 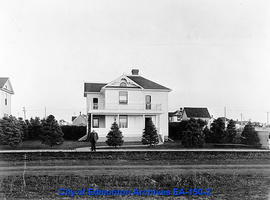 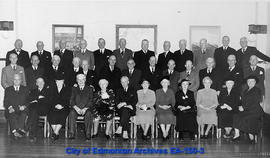 James McCrie Douglas was born 5 Feb 1867 in Middleville, Larnark County, Ontario to Presbyterian minister Rev. James Douglas and Margaret Blyth Douglas, both of Scotland. James McCrie Douglas was educated at Morris, Manitoba and became an early career there as a school teacher. He moved to Strathcona in 1894, where he operated a general store with his brother, R.B. Douglas. The Douglas Brothers’ store was located on the northwest corner of 104th Street and Whyte Avenue and soon became a landmark in the Strathcona area. The same year James married Mary Cameron Brickerton.
He was elected an alderman of Strathcona before 1909. In that year he was elected Liberal Member of Parliament for Strathcona, a seat he held until 1921. In 1911 he was chosen as part of the Canadian delegation which traveled to England for the coronation of King George V.
In 1914 James joined the Canadian Army. He worked in the Supply Division, achieving the rank of Captain. After the war, returning to Edmonton, he was elected a city alderman in 1922 and in 1929 he was elected Mayor of Edmonton, a position he held until 1931. In 1941 he was once again elected as an alderman and he remained in office until his retirement in 1949.
James McCrie Douglas also pursued farming after purchasing land (west half section 26, township 51, range 25, west 4th meridian) from Col. F. C. Jamison in 1922. Mr. Douglas spent a great deal of time over the next 10 years clearing the land and learning farming. In 1931 a nephew, J. Douglas Shaw, was sent to the farm for the summer to help James. Shaw would spend the following two summers on the farm with his uncle, eventually going to the Olds School of Agriculture. J. Douglas Shaw and his wife helped James McCrie Douglas on the farm after the death of Mary Douglas in 1947 and eventually took over the farm after James’s death.
James McCrie Douglas died on 16 Mar 1950 at at the age of 83 yrs.

J. Douglas Shaw was a nephew of James McCrie Douglas.

The fonds was donated to the City of Edmonton Archives by J. Douglas Shaw in 1972 and 1982.

The textual material was arranged by the archivist by type of document.
The photographs were assigned item numbers with the prefix EA-150.