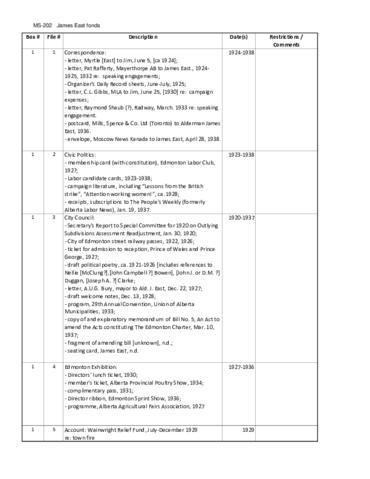 James East was born in Bolton, Ontario, Oct. 7, 1871. After an extensive period of travel and work in the United States, New Zealand, Australia (where he worked in the gold fields) and Europe, he returned to North America, married Myrtle R. Lewis in Detroit MI on April 10, 1907, and settled in Edmonton AB.

He enlisted in the Canadian Expeditionary Force in 1916 and served aboard a hospital ship, attaining the rank of Corporal. He was a member of the Canadian Legion of the British Empire Service League and the Great War Veteran's Association as well as local, provincial and federal labour and farmer's organizations, including the Co-operative Commonwealth Fedaration. He died in Edmonton on June 23, 1940.

The records in this fonds were found in the basement of the donor's home, formerly the home of James East.

The newspapers were photocopied and the originals destroyed, due to mould damage

This fonds was donated to the City of Edmonton Archives by Gordon Barr in 1974.

The material was arranged by the archivist by subject.

The newspapers were photocopied and the originals destroyed due to mould damage.