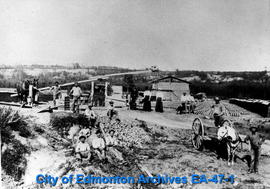 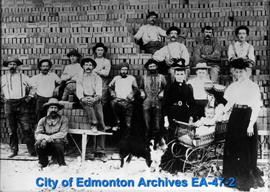 James B. Little was born 10 Mar 1854 in New Cumnock, Ayrshire, Scotland. In 1964 he moved with his family to Newcastle, Scotland. Shortly after, the family was orphaned. James immigrated to Canada with his brother and sister to live with their uncle in Milton, Ontario in 1865. He worked in his uncle’s blacksmith shop for a few years, then on a farm near Milton. A young man, he worked for the Canadian Pacific Railway (C.P.R.) on the construction of their railway line along Lake Superior. Then he went to Chicago where he had his first experience with brick work. After four years doing brick work he moved to Manitoba to work in a brick yard in Winnipeg.
In the mid 1880’s he and his brother started a brickyard in Banff, while the C.P.R. was building their first hotel, The Banff Springs Hotel.
In 1892, Little came to Edmonton and purchased 10 acres on the Riverdale Flats. After clearing a few acres he was able to start a brickyard in 1893 using the natural clay found on the site. He manufactured brick with a horse powered machine and employed about seven men.
He married Susanna Tomlinson on 20 Dec 1893 in Calgary. They had two sons, David and John. His wife Susanna died 27 Dec 1912 and is buried at the Edmonton Municipal Cemetery. Little married again in 1915, to Sara McRae.
James Little purchased another twenty acres in 1902 and changed the yard over to steam power. By this time, he had about 20 employees. In 1920 his sons, David and John, became partners and the business was incorporated as J.B. Little & Sons. By the mid 1930’s, the brickyard employed about 40 men in the summer months and would produce about 35,000 brick per day. J.B. Little & Sons became the oldest operating brickyard in Alberta and the “Little” bricks have been used to build scores of commercial buildings and homes in Edmonton.
James B. Little died in 1939 and is buried at the Edmonton Municipal Cemetery.

J. Little is a descendant of J.B. Little.

This fonds was donated to the City of Edmonton Archives by J. Little in 1968.

The photographs were assigned item numbers with the prefix EA-47.