The fonds consists of a series of scrapbooks compiled by Emily Murphy covering all aspects of her varied career and dating from 1906 to 1933. The records include correspondence, reports and other material relating to her work as a magistrate as well as manuscripts of some of her many articles. Some of the material relating to Mrs. Murphy was collected by her daughter, Evelyn Gowan Murphy, after Mrs. Murphy died. Scrapbooks include clippings concerning the death of Arthur Murphy and the lives of Evelyn and her sister, Emily Kenwood.
The photographs include 2 of Emily Murphy and 2 of dust jackets from her books “Janey Canuck In The West” and “Open Trails”.
The material was arranged as follows: 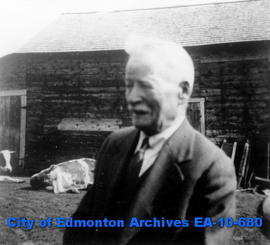 This fonds consists of news clippings and a memorial card relating to the deaths of members of the extended family of George W. Davies. Also includes photographs of George W. and Sophia (Armitage) Davies and of Jacob and Rosie Wuetherick, parents of Emma (Wuetherick) Davies.

The fonds consists of a photocopy of land grant to Kenneth McDonald for 160 acres of River Lot 20, Edmonton Settlement, Jan.21, 1886, Homestead No. 34509 and one envelope addressed from Henareth McDonald to Miss Duncan McLelland. The photographs include Emma (Rowland) McDonald and two children, William McDonald and family, and a photograph postcard of a Blackfoot man with a pony and teepee.