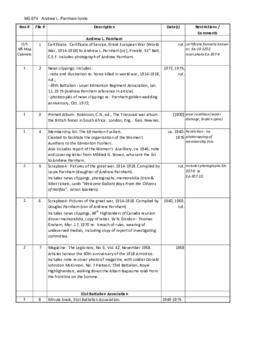 The fonds consists of one photograph of the 1st Depot Battalion (Alberta).
Depot Battalions were created in central locations across Canada to handle the training of the final allotments of recruits. The recruits received minimal training at the Depot Battalions and were then sent to reserve battalions in England where they received the rest of their training. The 1st Depot Battalion was formed in 1917 and 1918 to provide reinforcements for the 10th, 31st, 49th and 50th Battalions through the 21st Canadian Reserve Battalion.
It is possible an ancestor or relative of Audrey Bourget is in the photo but this is not confirmed.

The fonds consists of a partial copy of a document labelled 'Sailed for Vladivostok' which is the nominal roll of the Canadian Siberian Expeditionary Force, 1918-1919.