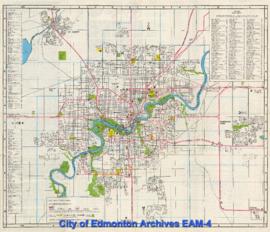 This map includes various places of interest, including swimming pools, hospitals, and parks. The verso includes a map of downtown Edmonton and an "Edmonton Mini-Map". 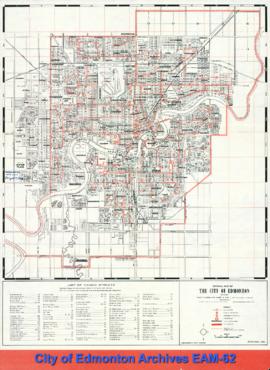 Official Map of The City of Edmonton

This maps is part of a pamphlet called Edmonton Tourist Map. The map shows bus routes, public schools, separate schools, hospitals, neighbourhoods, City limits, and routes to the International Airport. The other side includes other places of interest, as well as general tourist information. 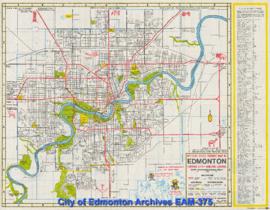 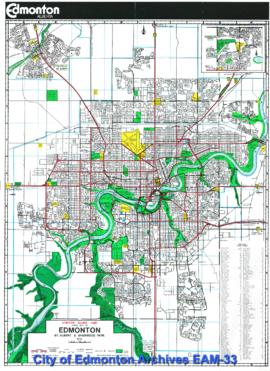 This map was printed for the visitors during Commonwealth Games, and includes information about the event as well as various points of interest. 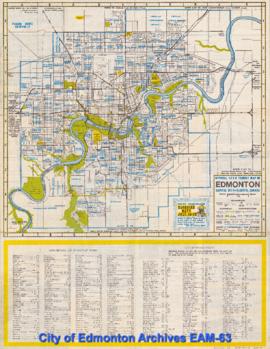 This map is part of a pamphlet titled "The City of Edmonton Street Map and Tourist Information Guide". The map includes hospitals, parks, places of interest, tourist attractions, subdivisions, streets, swimming pools, and land subdivisions. The other side contains general tourist information. 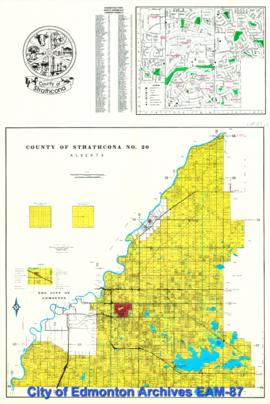 County of Strathcona No. 20 Alberta

This map includes land ownership, roads, sections, places of interest, tourist attractions, and bodies of water. This map is part of a double-sided brochure titled "Strathcona". It also includes a map of Sherwood Park, and visitor information about the Count of Strathcona. 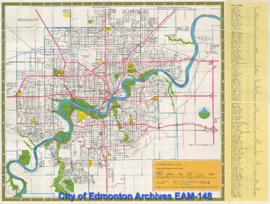 The verso includes a map of points of interest and a detailed map of downtown Edmonton, as well as tourist information. 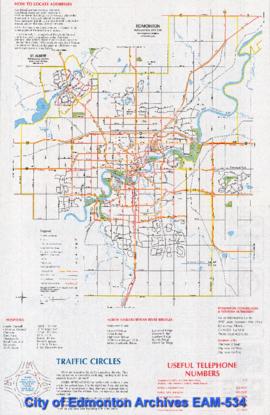 This map includes information on parking, speed limits, and traffic circles, as well as the locations of hospitals and other points of interest. 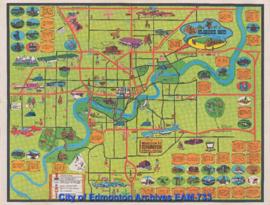 This map includes illustrations and directions for city sites, as well as the locations of Camelot Ice Cream, A&W and Chubby Chicken Drive Inns, Burger King and Kentucky Fried Chicken Drive Inns, Boston Pizza Restaurants, Pacific 66 Service Stations, IGA Supermarkets, Safeway Supermarkets, and liquor and beer stores. The verso includes a timeline history of the city and an illustrated map of downtown, including the locations of various sites and businesses of interest. This map also promotes Klondike days for 1971 and 1972.