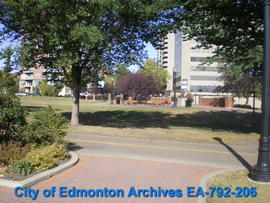 Ezio Farone Park.
The High Level Bridge was designed by Phillips B. Motley, the Engineer of Bridges for the Canadian Pacific Railway, and was constructed between 1910 and 1913 at a cost of two million dollars. It was the first bridge in Canada to carry four different modes of traffic: rail, streetcar, automobile, and pedestrian. The first passenger train, seven cars long and carrying 200 passengers, crossed the bridge from Strathcona to Edmonton on June 2, 1913.
The structure is approximately one-half mile long (0.8 kilometre) and stands 152 feet (46.3 meters) above the mean river level. The construction of the bridge was a significant engineering achievement for the time, and the High Level Bridge remains a distinctive city landmark. 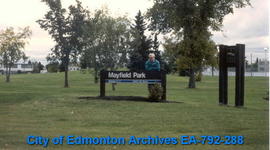 Mayfield Park (10945 - 161 Street).
Mayfield district and Mayfield School were named to commemorate the distinguished western Canadian fighter "ace" and bus pilot Wilfrid R. ("Wop") May (1896-1952). In April 1919 he founded May Airplanes Ltd. with his brother Court May and George Gorman. This was one of the first commercial aviation companies established in Canada. That year he carried out the first local aerial freight lift in "The City of Edmonton", a Curtiss Jenny JN4. The following year May piloted the first flight into Peace River country, and from this time onward his name is linked closely to the opening of the resource frontier north of Edmonton. More than any other individual "Wop" May established Edmonton as The Gateway to the North following the First World War. The rough airstrip where his pioneering efforts commenced in 1919 was located in a farmer's field near this site. 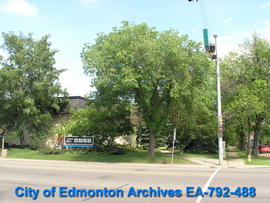 109 Street & 80 Avenue.
The Tipton Gyro Park is named in honour of former Alderman John G. Tipton. This park was officially opened on June 21, 1924. Fulfilling their slogan, "Playgrounds for Children", this became the third of nine parks built in the city by the Edmonton Gyro Club. The Gyros also provided regular maintenance and supervision of all the parks during the playground season of May 24th to August 31st. Their care of the equipment is evident, as some of the original slides are still being used. Over the decades, hundreds of thousands of children, and adults too, have enjoyed this and the other Gyro Parks. Responsibility for the Gyro Parks was later assumed by the City. 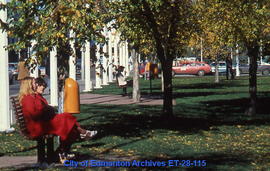 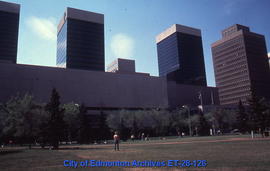 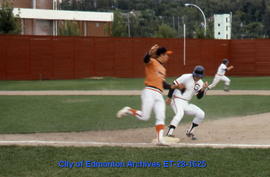 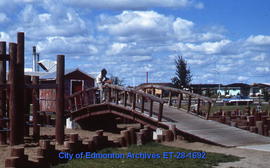 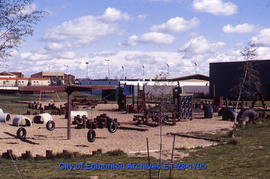 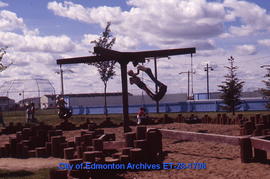 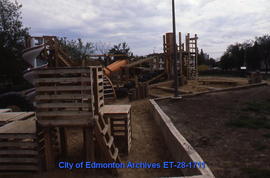