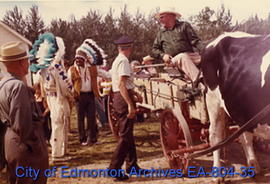 Facing the camera at the rear of the cart is Chief Sam Bull of Goodfish (Whitefish) First Nation. Beside him with his back turned, is Councilor Roy Louis of Samson Cree Nation. This photo was taken during the "Heritage Day - Scarlet 100" special event hel 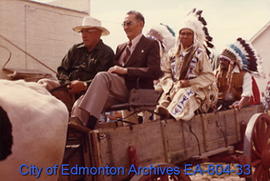 This photo was taken during the "Heritage Day - Scarlet 100" special event held at Fort Edmonton Park in honour of the Centennial anniversary of the Royal Canadian Mounted Police (RCMP). Lieutenant Governor Ralph Steinhaur is sitting in the front on t