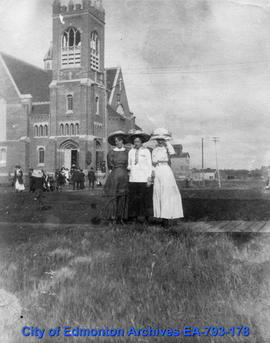 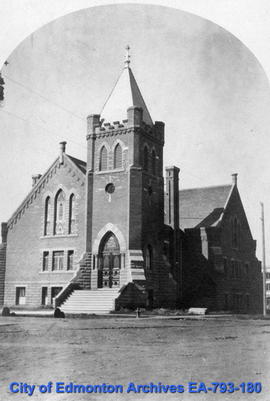 First Baptist Church on the corner of Second and Athabasca (102 Street & 102 Avenue). 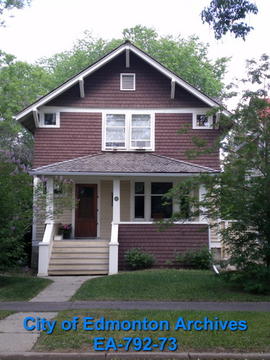 10958 - 89 Avenue.
The Craftsman-style architecture represented by this house was popular in the city during the time of its construction, circa 1912. The photograph shows it as it was in 1933. Design elements include: the gable roof configuration, side dormers, central brick chimney, triangular eave brackets, wooden double-hung windows, and the hipped-roof open verandah with solid handrails. Of special note is the symmetrical arrangement of upper floor main windows and corner 'eye' windows in the front facade.
The house is significant because of its associations with Cecil Scott Burgess (1870-1971) and Percival Sidney Warren (1890-1970).
Mr. Burgess lived here from 1941. He joined the University of Alberta in 1913 when he was appointed resident architect and professor of architecture. He designed and supervised the construction of many early campus buildings including the Arts Building, Pembina Hall and the staff Ring Houses. His legacy is further evident in the Rutherford Library and the Students' Union Building, which were designed by his students. Mr. Burgess' influence was felt beyond the borders of the University of Alberta campus. He was for thirty years a member of the Council of the Alberta Association of Architects. He designed the Bowker Building and the Birks Building, recognized as significant contributions to this city's architecture. 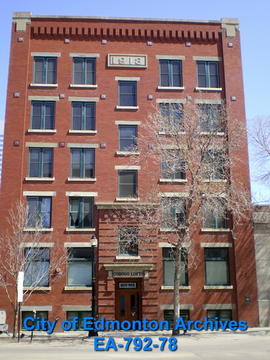 10249 - 104 Street.
January 16, 1913. The temperature plunges well below 20C. With inadequate water pressure to run their equipment, firefighters watch hopelessly as the inferno engulfs two buildings on this location and kills three people. This is one of the worst fires the city has seen, and it sparks rapid improvements in local fire safety practices.
William Allen, head of a Winnipeg investment consortium, acquired the charred site and built a replacement warehouse for the previous tenant, the Canadian Consolidated Rubber Company, in only two months. The designer and builder, the Canadian Stewart Company of Toronto, had just finished constructing the Macdonald Hotel when it installed the latest in fire safety technology in the new warehouse. Concrete encases the boiler room; metal sheaths the new fire doors; and the interior stairs feature steel risers, treads, and stringers. The windows on the east facade, where minimal setback was provided at the lane, offer increased fire and security protection owing to their metal sash construction and pivoting, wired glass infill panels. The west facing windows remain wooden and of double-hung sash construction.
The building's design creates a more vertical emphasis than its neighbours, with its two storey entrance and centre bay of windows located at the stair landing rather than on each floor, but the overall Commercial style facade characterizes the warehouse district.
This building served the rubber company until 1935, and is one of the longest-standing warehouses in the downtown core. Few significant exterior changes have been made by subsequent owners which have included the Kaufman Rubber Company, Cobogo Holdings Ltd., and the Army and Navy Department Store Holdings Ltd. 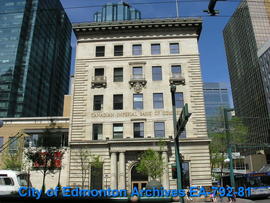 10102 Jasper Avenue.
This late Renaissance Revival commercial building was designed by V. D. Horsburgh, and built under the direction of Herbert Magoon and George H. Macdonald at a cost of $500,000. The building opened as the Canadian Bank of Commerce on July 2, 1929. In 1962 the Canadian Bank of Commerce merged with the Imperial Bank of Canada and the building became known as the Canadian Imperial Bank of Commerce.
An addition in 1964 and further modernization in 1984 resulted in extensive changes to the exterior of the north portion of the bank and its interior. In 1998-99 the CIBC undertook a major renovation and upgrading program to refurbish the banking hall and re-establish this as a prominent building in downtown Edmonton. 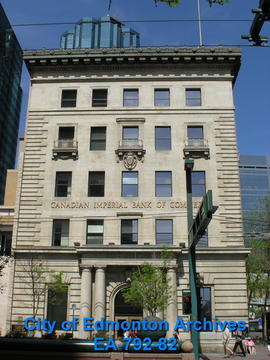 10102 Jasper Avenue.
An Edmonton Bulletin report in 1929 described the bank as, "...one of the most highly furnished and finished banking rooms in Western Canada." The east and south faces of the building are Manitoba Tyndal stone, used extensively throughout the city as a finish for financial and government buildings. There are three balconettes on the south face and four more on the east side with metal balustrades carrying the Bank's monogram. Double Tuscan columns flank the front entrance along with the Bank's insignia.
Inside, the bank featured a high dentilled plaster ceiling, polished walnut counters and Ionic columns and pilasters. There was a modest level of bronze and marble detailing which is evidenced today in the stair serving the second to sixth floors. This building is an early example of reinforced concrete construction and utilized a thermostatically controlled heating system, unique for its time. The top four storeys of the five storey building were rented to a variety of professionals and retailers over the years. 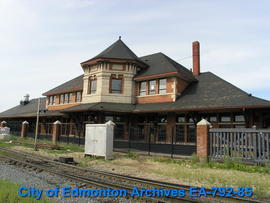 8101 - 103 Street.
In 1891 the first train arrived in South Edmonton. The original station was a wooden structure built just south of this location. A replica of that station has been recreated by the Junior League of Edmonton and is used as the C & E Railway Museum.
Construction began on this building in 1907 and it was opened on January 21, 1908, at a cost of $30,000. Its architectural style combines a mixture of Scottish and French Chateau schools of design. The second storey remained undeveloped until 1914 when it was then used as a storage facility and living quarters for train crews. Although Strathcona amalgamated with Edmonton in 1912, it was not until 1932 that the name of the station was changed from Strathcona to South Edmonton Station.
The last passenger train left this terminal in 1985 and in 1992 the Historic Sites and Monuments Board of Canada designated the building a heritage railway station.
Strathcona Station remains one of only four stations of its design in Alberta, all of which were built from 1905 to 1910. 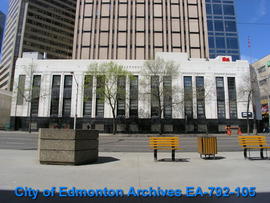 10003 - 102 Avenue
An 1886 telephone directory would have been easy to print. Four subscribers joined Edmonton's first telephone exchange established by Alexander Taylor. Within twenty years, this creative entrepreneur had connected 500 patrons to the revolutionary telephone, and sold his company to the city.
Outgoing calls were transmitted through telephone exchange equipment, with switchmen and operators connecting each call to the receiving line. Edmonton built the first municipal exchange on this site in 1907. The next year the city became a telecommunications leader when it installed the first automatic dial phones in North America.
Edmontonians used 2,000 phone lines by 1910. By 1914 more than 9,500 lines buzzed with conversation. Construction began on a new exchange immediately west of the original building, and the City converted the first brick structure into the landmark Labour Hall. The exchange soon required even more space. In the 1940s city architect Max Dewar designed an addition that doubled the building's capacity, and replaced the Labour Hall entirely. Remarkably, at the height of its operation, this exchange depended on twelve switchmen and two dozen operators to manage the equipment running through the huge building.
Dewar's vision for the Churchill Wire Centre set the standard for the 1957 City Hall and for subsequent structures surrounding the newly conceived idea of a central civic square. With modern materials, innovative technology, and the age of machines as Dewar's inspiration, the telephone exchange building remains a classic example of Moderne architecture. The style emerged from the Art Deco movement and introduced simple, smooth surfaces and the use of reflective material such as the glass blocks and polished black granite on this building. The winged figure holding lightening bolts and cables above the entrance represents new communication technology and typifies Moderne flourishes.
By 1949 almost three quarters of the available lines had been used and the downtown building eventually became too cramped and expensive. The Churchill Wire Centre was abandoned, but community pressure concerning the building's historical significance saved it from demolition in the 1990s. 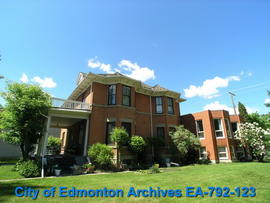 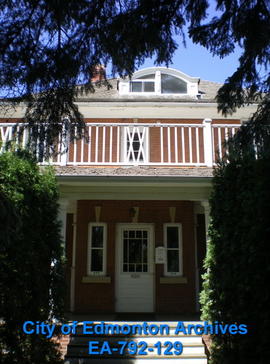 8520 - 104 Street
Hugh Duncan commissioned John Sanford to build a large, embellished version of a Foursquare home for his family here in 1911. At the time, the Edwardian era Foursquares were the most popular house style on the prairies, projecting a modest dignity: symmetrical and simplistic in ornamentation, yet lavish in stature and domesticity. This house features a flared bell cast roof with curved dormer windows, tapered posts supporting a full-length open veranda, a projected front door entrance, a north-facing bay window, and keystone details above the ground floor windows.
Hugh and Clara Duncan, together with their children Edgar, Grace, and Brock, truly made what was then 60 Main Street North a fine home after it was completed in 1912. Edgar, wounded in Passchendaele during the First World War, returned here to study engineering at the University of Alberta. Brock followed in his father's footsteps, and established the Jasper Place Pharmacy. He later took over his father's business, Duncan's Drug Store on Whyte Avenue, after Hugh's death in 1935. Grace became a teacher and lived here with her family until the city bought the house in the 1960s.
Two decades later, the Old Strathcona Foundation purchased and renovated the residence for use as its organizational headquarters.