The fonds consists of correspondence, meeting minutes and supporting documents, reports and legislation relating to the Steering Committee, Foundation of Cultural Heritage and the Edmonton Community Foundation, 1970-1971. The fonds also includes a portrait photograph of Merrill Wolfe, 1975, that was used for an Edmonton Historical Board award.

The fonds consists of two programmes and one news clipping of the Empire Theatre which opened in 1920 on 103 Street just north of Jasper Avenue. It operated as Edmonton's premier theatre until it was converted into offices during the Second World War. Its lifespan was roughly coincidental with the golden age of drama, opera, and vaudeville. Stars such as Harry Lauder, Charlie Chaplin, and Will Rogers were among the performers. The building was used not only as a playhouse but also for political gatherings, sports broadcasts, and city theatrical productions.
Note: both programmes include a variety of advertisements of local businesses of the time, including full page ads for Swift’s on the inside front covers.
Item List:

The fonds consists of a copy of "Sixty Years Young - The Story of McKay Avenue School", compiled by Mr. Sinclair. The manuscript relates the development of the Edmonton School District No. 7, McKay Avenue School, and the general area. One newspaper clipping is also included. The oil painting by J. Gordon Sinclair, titled "Gold Washing", depicts three miners working a grizzley on the river (gold mining). 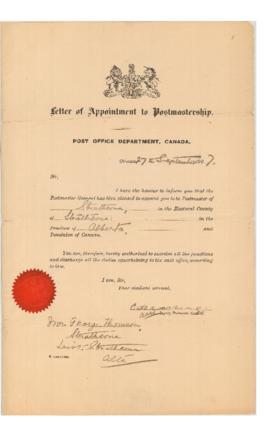