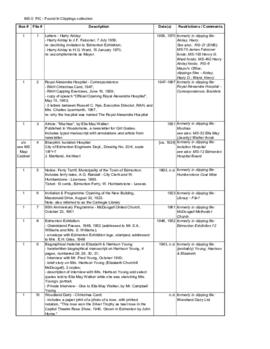 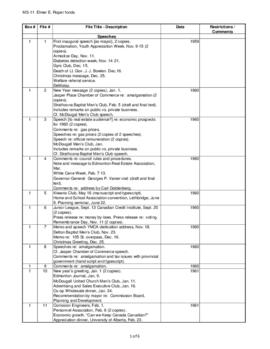 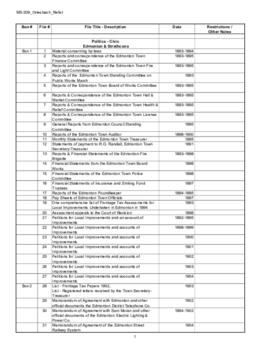 The fonds consists of William Griesbach’s political, military, and personal papers, as well as numerous books from his personal library.

Political papers consist of reports, correspondence, contracts, and financial documents concerning the City of Edmonton and the City of Strathcona between 1892 and 1935. There is also a 1912 Edmonton Subdivision map (EAM-178).

Military papers include correspondence, clippings, programs, pamphlets and other materials related to Major-General Griesbach's military career, created between 1919 and ca.1943.

Personal papers include correspondence, financial documents, theatre programmes and other materials relating to Griesbach's personal activities and interests. It includes correspondence on the memorial window in the Cathedral Church of All Saints in Edmonton.

The books reflect the various aspects of Griesbach’s life, career, and interests covering military, political, diplomatic, economic, and historical topics. It should be noted that the books published after Griesbach’s death in 1945 were added by the Western Command HQ Library.

The fonds consists of personal papers of Nicholas Beck, including: 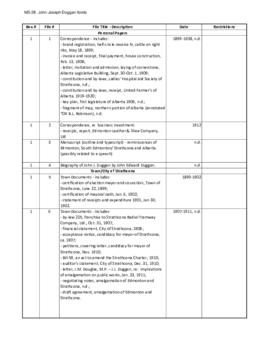 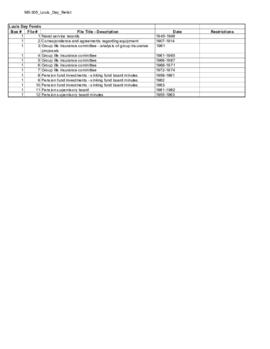 The fonds consists of materials created or collected by Louis Day of Edmonton and dating from 1907 to 1990. The fonds consists of correspondence and contracts relating to the purchase of fire fighting equipment for the Edmonton Fire Department between 1907 and 1913, as well as pension and group life insurance arrangements for the Fire Department between 1956 and 1974. The published works include the Fire Department's annual reports to Mayor and Council and reference materials for fire fighting.

The fonds consists of materials created by Julian Suski of Edmonton between 1955 and 1968. This fonds consists of a copy of the Canadian Federation of Municipalities Inquiry on Municipal Administration, reports, surveys of various cities, correspondence, materials gathered during European study tour, materials relating to the Council on Urban and Regional Research, proposals made to the City of Edmonton, booklets, organizational charts, statistics, history of the city and organizational annual reports.