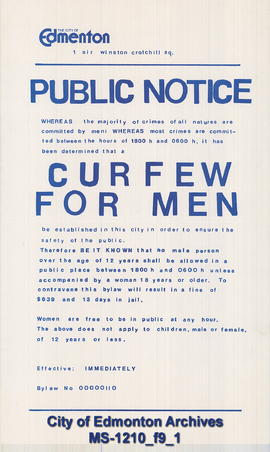 This poster is a mock public notice from "The City of Edmenton" establishing a curfew for all men over the age of 12 between the hours of 18:00 and 6:00. The outlined punishment on the poster for breaking the curfew is $639 and 13 days in jail. 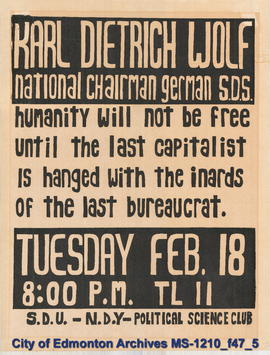 This poster is an advertisement for a meeting of the Students For a Democratic University, N.D.Y, and the Political Science clubs on February 18, 1969. The meeting was in regards to Karl Dietrich Wolff, a student activist and chairman of the German Socialist Student Federation, though it is unclear if Wolff attended the meeting as a guest, or was not in attendance. The poster features the message "humanity will not be free until the last capitalist is hanged with the inards of the last bureaucrat." 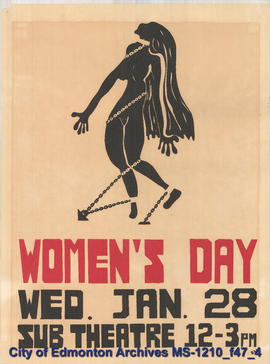 This poster raises awareness for Women's Day events on January 28, 1970 held at SUB Theatre, which included a panelist of speakers. The speakers were comprised of female authors, university and high school students, and other women's rights advocates. The poster features the illustration of a woman bound in shackles. 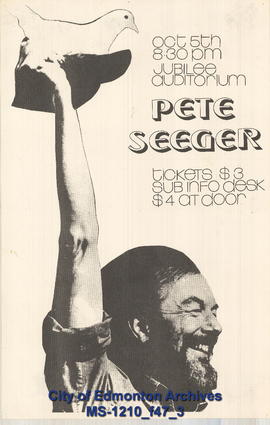 This poster is an advertisement for Pete Seeger's concert at the Jubilee Auditorium on October 5, 1972. The poster features a black and white image of Pete Seeger who is smiling with his arm stretched into the air, holding a hat. Edited onto the hat is the image of a white dove. 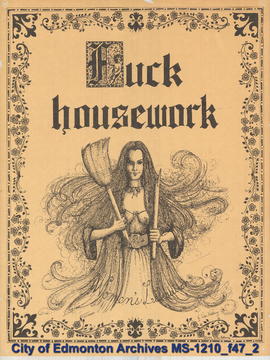 This poster features the image of a woman holding a broom that has been snapped in half. Written above the woman in fairytale style letters is the phrase "Fuck Housework." Written along the bottom of the woman's dress is "Women's Liberation." 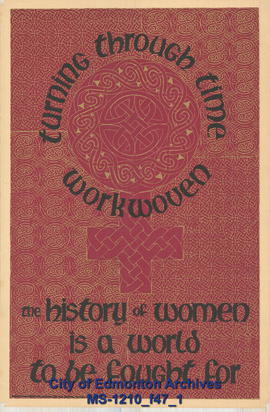 The History of Women is a World to be Fought For

This poster features the phrase "turning through time workwoven" written in a circle, surrounding the cross and circle symbol that is commonly used to represent females. Under the symbol is the message "the history of women is a world to be fought for." The poster's design features various red and gold knots. 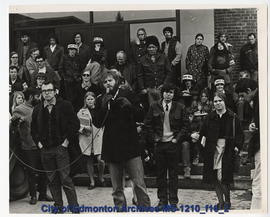 This photograph shows a crowd of people attending a demonstration on steps in front of a building. In the center of the photograph is a man giving a speech into a microphone, with a crowd of university students listening behind him. Many of the students are wearing military helmets or arm bands with the phrase "Thought Police" written in large black letters. 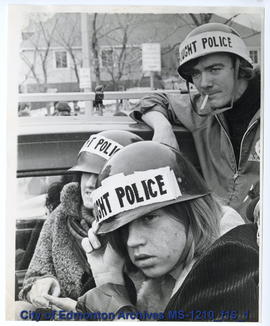 This photograph is a close up image of 3 student protestors leaning on a vehicle, looking at something off camera. All of the students are wearing military-style helmets with the phrase "Thought Police" written in large black letters. One of the students has a cigarette hanging out of their mouth. 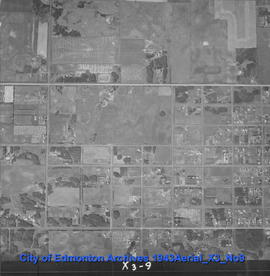 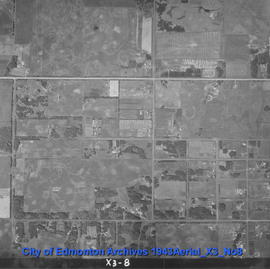