The fonds consists of photographs of people, nature, weather, buildings, street scenes and events in Edmonton, as well as some self-portraits and still lifes. Of special interest are sequential photographs of storms and weather events, as well as building demolition and construction, notably the Molson’s Brewery building on 104 Avenue. 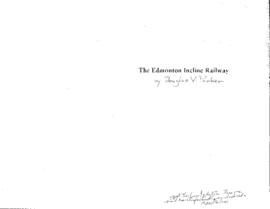 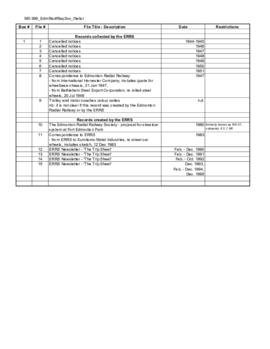 The fonds consists of research papers written by Raymond Corley on the history and development of the Edmonton Interurban Railway and the Edmonton, Yukon and Pacific Railway.

The Edmonton Interurban Railway ran between Edmonton and St. Albert. The line opened on September 30, 1913, and was partially phased into the Edmonton Radial Railway System in 1916. In 1920, the system was purchased by the City of Edmonton.

The Edmonton, Yukon & Pacific Railway was the first railway built into Edmonton, before amalgamation with Strathcona. The EY&P railway connected with the Calgary and Edmonton Railway (C&E) and eventually became part of the Canadian North Railway.

The records include the original research papers, with subsequent revisions.
Note – the later revisions are only the pages that were changed, not the entire paper.

The fonds consists of records created by Hooks Signs Ltd. of Edmonton.
The textural records (1912-1949, predominantly 1912-1919) include 9 invoice books from 21 Oct 1912 to 31 Oct 1919 and 2 Sep 1947 to 31 Jan 1949, as well as Hook Signs labels, certificates, Licenses, administrative records, and materials for an anniversary book.
The photographs (1920-1980) include images of the billboards and signs created by Hook Signs. There are also various street scenes and intersections in Edmonton, with a blank billboard sign in the background. These were used to show advertising opportunities to potential clients.