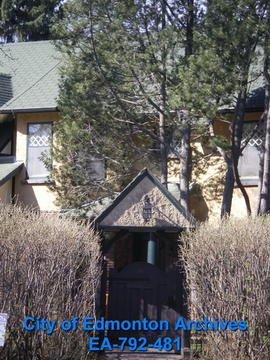 36 St. George's Crescent.
A popular residential landmark, "The Graenon," a Gaelic word meaning "Sunny Place," was built in 1913 - 1914 for Hannah Margaret (Fairlie) O'Connor and George Bligh O'Connor. It was the first house constructed on St. George's Crescent and the only building ever constructed by Mrs. O'Connor's brother, W. A. Fairlie, who died a few months later during World War I.
"The Graenon" is an exceptional example of domestic architecture of the time. It was designed by a group of Virginia architects under the direction of Edward Bok, the renowned editor of Ladies' Home Journal. Bok was largely responsible for defining a North America-wide stylistic revolution; one that rejected the ornate tastes of the Victorian era for simpler lines. Hence, the exterior of the house is of a Tudor Revival design, while the interior, with its quarter-sawn woodwork, reflects the then-current Arts and Crafts movement.
G. B. O'Connor was a prominent Edmonton barrister who practiced law with Major-General William A. Griesbach before becoming a judge, and later, Chief Justice of Alberta. The O'Connors entertained many of Alberta's early leaders in government and business at "The Graenon." Lieutenant Governor J. J. Bowlen was sworn into office in the front garden in 1950.
Their daughter, Peggy O'Connor Farnell, was born in the home and lived there for over eighty years. Peggy was one of Intrepid's British Security Co-Ordination agents from 1942 to 1945. In 1946, she married Gerald Farnell and they raised three sons. She then worked as a librarian at the University of Alberta for many years in addition to authoring a history of Old Glenora.
Carefully restored to its original character, the residence stands as a milestone in Alberta's early heritage. Of particular interest is a unique ornament - look for the porcelain cat, purchased by the family on a trip to Normandy. It has looked down from the roof since 1928. 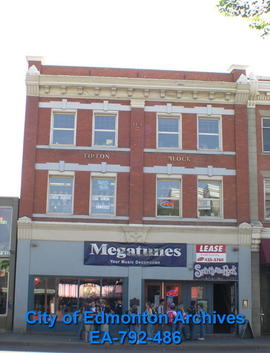 10355 - 82 Avenue.
The Tipton Block was built in 1911 for R.A. Hulbert, a local businessman. The building was sold in 1912 to J.G. Tipton & Sons, Strathcona's oldest real estate firm. John Gaddis Tipton, the firm's principal, was a lawyer and alderman who promoted the amalgamation of the Cities of Edmonton and Strathcona in 1911.
The main floor was used for commercial purposes while the second and third floors contained offices. The building has been occupied by Drs. Marion and Toombs, dentists, Essery & Co. Men's Wear, and Bailey & Ferguson Real Estate, among others.
After years of disuse, the Tipton Block became a restoration project of the Old Strathcona Foundation. It was re-opened on October 4, 1979. 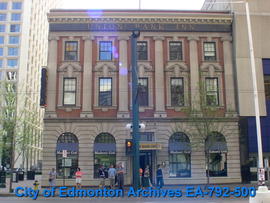 10053 Jasper Avenue.
In 1910, when Union Bank announced plans to build on this site few people would have predicted the building would hold a unique place in Edmonton's history. Shortly after opening, the Bank was one of over 10 banks situated on Jasper Avenue between 100th and 101st streets. Today it is the last remaining bank building of the pre-1914 era left on Jasper Avenue.
The Union Bank of Canada opened its first branch in Edmonton in 1900. As the business grew, land was sought on which to construct a suitable building. Buying property from Frank H. Gray for $50,000 in 1909, the Bank hired local architect Roland Lines to design this building.
Designed in the Modern Renaissance style, the local firm of Otto Edinger and Everett Nesbitt were hired as contractors. The base of the building is solid Bedford limestone from Indiana, also found on another Lines building, the Canada Permanent Trust. The red pressed brick, which came from local brickyards added colour to the appearance of the building.
In the original design, the main floor was used as the banking floor. The floor was tiled and finished with columns, entablatures and mahogany woodwork. The building was purchased by the Canadian Realty Company in 1911 for $121,500. In 1928, James Richardson and Sons became the new owner and held on to the building until 1979 when it was purchased by North West Trust. 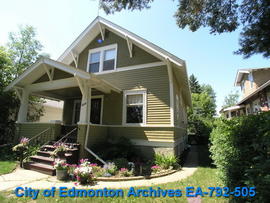 10950 - 81 Street.
Battle-weary soldiers returned home from the First World War to face an economic slump and widespread unemployment. Reunited families desperately sought the social stability and comfort that comes from simple family living. Defying the elaborate Victorian styles of the turn of the 20th century, the Craftsman-style homes that emerged in Edmonton's neighbourhoods in the 1910s and 1920s emphasized a longing for hominess and family virtues.
Built in 1923 and named after one of its earliest occupants, the Richard Wallace Residence exemplifies Craftsman qualities with its simple, meaningful design. The interior emphasizes form and function, with space conservatively and creatively fashioned for everyday living.
Richard Wallace, a registrar, sheriff, and clerk of the Supreme Court of Alberta resided here from 1925 until 1943. 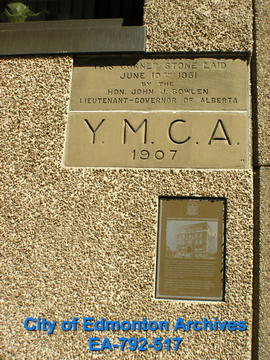 10030 - 102A Avenue.
The cornerstone of Edmonton's original YMCA was laid on July 1, 1907 by Mrs. G.H.V. Bulyea, the wife of Alberta's first Lieutenant Governor. The completed building, which was officially opened on February 6, 1908, saw Edmonton's YMCA become another valuable link in the growth of the worldwide Young Men's Christian Association. In 1951, a new YMCA building was erected on an adjacent lot and was expanded in 1961.
Throughout this century the YMCA of Edmonton has consistently served the citizens of Edmonton and district with high quality physical, spiritual and social programs. The "Y" also provides shelter and friendship to the traveling public. 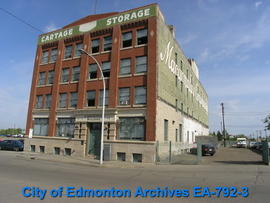 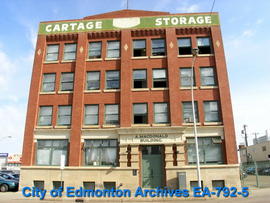 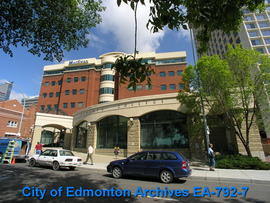 In the 1860s the Reverend George MacDougall bequeathed his homestead on this site to the Methodist Church for educational and missionary purposes. Alberta College was founded by members of the MacDougall Church Board in 1903. The college offered a curriculum of music, commercial, secondary school and university transfer subjects, initially in affiliation with McGill University.
After a year in temporary premises, the college occupied its first permanent building on this site in 1904. In 1926 the Theological Department was amalgamated into St. Stephen's College on the University of Alberta campus. That same year the college expanded into a handsome gothic style building faced with tapestry brick and Indiana limestone. The building was demolished in 1961, and its successor was in turn replaced by the current structure which opened in 1993. 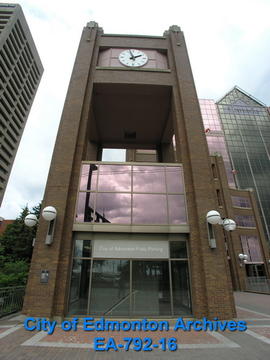 9700 Jasper Avenue. When the Alberta Hotel was built in 1903 it was regarded as the most fashionable establishment in Edmonton. It included the finest bar and restaurant in the district and featured an elevator, a unique call bell system and the Town's first shower baths. It was here that Sir Wilfred Laurier stayed when he proclaimed Alberta a province in 1905. 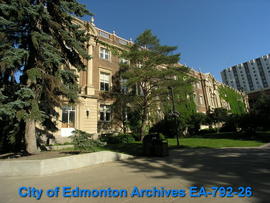 The University of Alberta's Arts Building was officially opened on October 6, 1915 by Alberta's first Lieutenant-Governor, G.H.V. Bulyea. The building was designed by the architectural firm of Messrs. Nobbs and Hyde of Montreal. The contractors were George Fullert and Company. The building is one of Edmonton's finest examples of the neo-classic style of architecture. Originally the Arts Building contained lecture rooms, laboratories, administrative offices and a convocation hall.