The fonds consists of photographs of Dr. Norman L. Terwillegar. 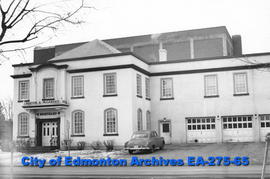 The fonds consists of photographs of the Mawhinney family, sports teams the Mawhinney’s were part of, the family home in Rossdale, the Arctic Ice Company, the Ross Flats clubhouse, the North Saskatchewan River, and damage from the 1915 flood.

The fonds consists of copies of photos from the Gray family photo album.
The photographs include photos of the Gray family, including Bishop Gray in his professional capacity, as well as local Boy Scouts and All Saints’ Anglican Cathedral.