The fonds consists of photographs of various flowers and floral arrangements, a long-time passion of Ethel Dorin. Some capture scenes of Walter Dorin working at Pike Seeds, the Dorin family home and acreage, and Grace Lutheran Church. 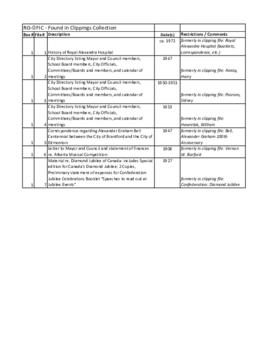 The fonds consists of family and homesteading records belonging to Johan A. Siden. The family correspondence includes letters to “Dad” (from Tony), “Mom and Dad” (from Nora, includes references to brother Tony and husband Bill), “Mr & Mrs Siden” (from Mary and Carl, with references to Nora and Bill, Fritz and Edmond), and “Sir” (from Edmond).
There is also an invoice from Dr. Peter Farney & Sons, Co., Chicago, and an advertising card for ‘Davis & Lawrence Asparagus Kidney Pills’.
The homesteading documents relate to obtaining entry for homesteading, record of road work in lieu of taxes, requests for information from the Dominion Bureau of Statistics including agricultural surveys (Survey of Crops and Live Stock June 1944; Live Stock and Poultry Survey, December 1944), receipt for medications, record of special grant payment.

The fonds consists of photographs of the Edmonton skyline from various viewpoints.

The fonds consists of records belonging to Kenneth William MacKenzie. They include: