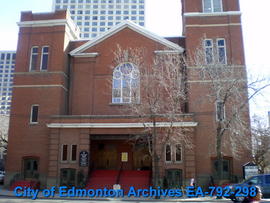 10086 MacDonald Drive.
The Reverend George Millward McDougall (1821-1876) and his son Reverend John McDougall (1842-1917) initiated the first settlement outside the walls of Fort Edmonton on this site in 1871. In 1860, Rev. George McDougall was given charge of Methodist missions throughout the Hudson's Bay Company territories, and two years later he first visited the Edmonton area where his son established the Victoria mission fifty miles down the North Saskatchewan River near present-day Pakan. In 1863 the Rev. George McDougall, his wife Elizabeth, and their family, including John McDougall, arrived at Victoria, where they stayed until June 1871. The McDougalls moved to Edmonton in 1871 and began construction of a two-storey parsonage at this site. During 1871-73 their first church was constructed here as well; this church can now be seen at Fort Edmonton Park.
Originally attracted by the availability of land following the transfer of Rupert's Land from the Hudson's Bay Company to the new Dominion of Canada, the mission soon formed the focal point of settlement along the eastern boundary of the Hudson's Bay Company Reserve, and became the seed for the first significant urban growth outside Fort Edmonton itself. 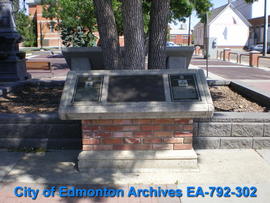 83 Avenue and 104 Street.
Dr. Wilbert McIntyre was born on July 15, 1867, at Rosedale, Victoria County, Ontario. He first traveled west in 1891, where he taught briefly at Winnipeg Commercial College, White Fish Lake residential school, and worked on a ranch near Calgary. Returning to Ontario he graduated from the University of Toronto Medical School in 1898. However, he returned west to Strathcona in 1902, and spent the remainder of his life here. McIntyre was Secretary-Treasurer of the Strathcona Liberal Association (1902-1906).
In 1906 Peter Talbot, Liberal M.P. for Strathcona, was offered one of three new Alberta Senate seats. In the resultant by-election on April 5th McIntyre was elected overwhelmingly to represent the constituency, which at that time extended south to Innisfail and east to Lloydminster. He was therefore Strathcona's first elected representative in the new Province of Alberta.
McIntyre worked unsuccessfully to attract the Grand Trunk Pacific Railway to Strathcona, and later supported the proposal for a High Level Bridge connecting the town with Edmonton. During the October 1908 federal election he won a large majority, second only to Frank Oliver, Laurier's western lieutenant and Minister of the Interior.
In the spring of 1909 McIntyre returned to Strathcona to campaign for the provincial election. Following a short illness he died in July 1909. His funeral was said to be the largest of that time in the northern part of the province. His immense popularity was reflected by a commemorative fountain which was built in 1913 through popular subscription among his former constituents. 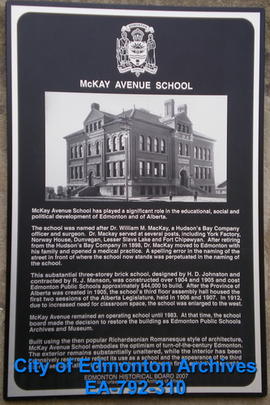 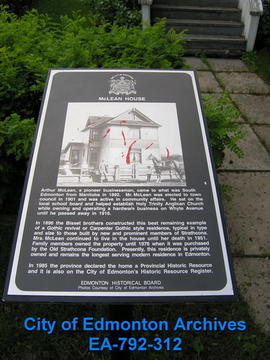 EHB Plaque for the McLean House 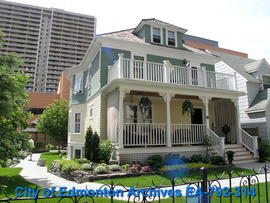 11135 - 84 Avenue.
This home, constructed by Tom Leake, was built in 1913 and then valued at $4,500. It is one of the original, unaltered structures still remaining in the neighbourhood. Sarah McLellan immigrated from Scotland in 1906 and purchased the lot from Laurent Garneau in 1907. He was the Metis farmer who owned most of the land on which the University of Alberta and the Garneau community are now located.
This residence is a larger version of the four square architectural style home with Arts and Crafts characteristics.
From 1916 to 1922, the house was used as a nurses' residence for the nurses working with WWI casualties at the military hospital that was located where the University of Alberta Hospital stands today.