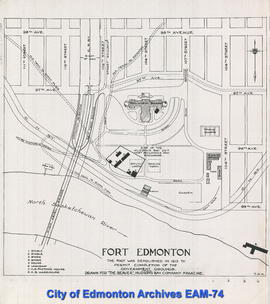 This map superimposes the layout of Fort Edmonton on the grounds of the Provincial Legislature. The map includes the modern streets and buildings of the area, and identifies how the HBC enclosure would have fit into the modern geography. 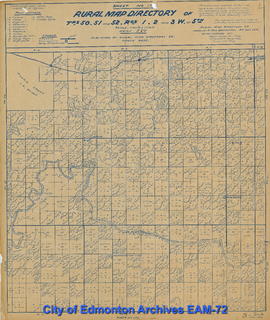 This map shows the location of post offices and details ownership for the sections of land. 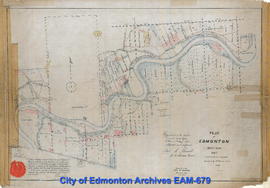 This map shows the ownership of river lots and settler improvements, as well as geographic features such as woods, hills, marshes, bodies of water, burnt woods, and prairie as it appeared in 1882. Certified a true and correct copy of the original by E. Deville, Surveyor General 11 July 1913. 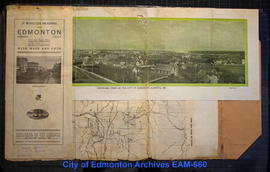 This map is part of a document titled "15 Minutes Reading about Edmonton - For the Busy Man of the 20th Century". The brochure was created as a promotional tool for Edmonton, and includes practical information on the city such as facts and statistics, and farm facts. It also contains panoramic view of the city of Edmonton facing north and east from the roof of McKay Avenue School. 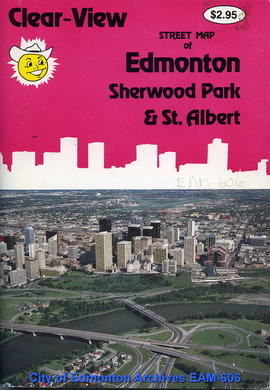 This booklet contains pages of individual areas and one large fold-out map. Buildings and apartments are listed in the back and districts are listed at the beginning. The verso includes maps of St. Albert, Sherwood Park, and downtown Edmonton. 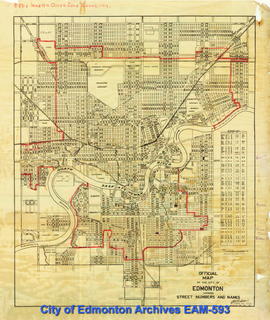 Official Map of the City of Edmonton

This map shows street names and numbers. It is annotated in red to show the "Inner and Outer Zone Boundary". 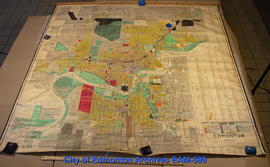 This map outlines single family dwellings, multiple dwellings, schools, institutions, government buildings, churches, heavy industry, parks, cemeteries, airport and the university farm. There is an index to subdivisions and the map is hand coloured in crayon. 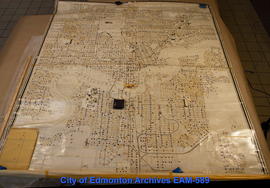 This map shows the subdivisions and lots of Edmonton. It shows the fire hydrant locations and different pipelines; cast iron, steel, transite and wood. It marks pipes of 2" and less and main pipelines 12" and over. Hydrants are listed according to size, 4"main, 6"main and 8" main and larger. The map also outlines the community of Goldbar and its borders of 50 street in the east, 137 avenue in the north and 149 street in the west.

This map of south side subdivisions stretches from the university grounds and river lots in the west; Boulevard Heights in the east; North Saskatchewan river and Mount Pleasant in the north and City Industrial sites, the speedway and Hampton Heights in the south. The map includes street and lot numbers.