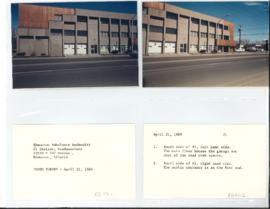 This series contains building plans submitted to the City of Edmonton to the Town of Beverly as required to receive a building permit.