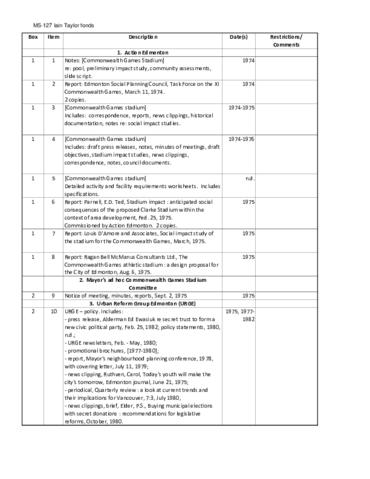 Iain C. Taylor was born May 25, 1943. He was educated at the universities of Leeds (B.A. Hons., 1964), Toronto (M.A., 1966) and Liverpool (Ph.D., 1976) as a geographer, specializing in urban studies. While studying, he worked for the Ontario government, University Of Toronto and Seneca College, the University of Liverpool and Open University in England. In 1973, he became an original member of the faculty of Athabasca University when it was created as an institutional primarily focused on distance education.

Iain Taylor was involved in a number of community and political groups in Edmonton AB, including the Cromdale Community League (1974-1978), Action Edmonton, an community advocacy group on the design and construction of the Commonwealth Games stadium (1974-1976), a member of the Mayor's ad hoc Commonwealth Games Stadium Committee (1974-ca. 1979); and the Urban Reform Group Edmonton (URGE), a civic political party (Board member, 1976-1978, 1980-1981, President, 1977-1978). He ran unsuccessfully as an URGE candidate for alderman in 1980.

From 1991-1996, he was Chief Geographer, National Atlas of Canada (later Geomatics Canada) and Manager Conservation Programs, Atlantic Canada region, Environment Canada, 1996-1999. From 1995, he has been a land use and heritage property consultant, operating under the firm, North by Northwest, in Halifax NS.

This fonds was donated to the City of Edmonton Archives by Iain C. Taylor in 1987 and 1991.

The material was arranged by the archivist based on creator and then in chronological order.