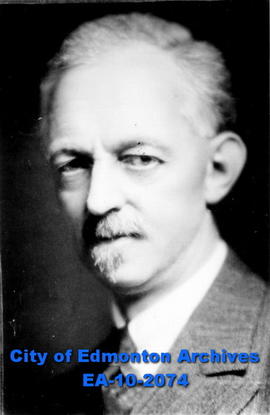 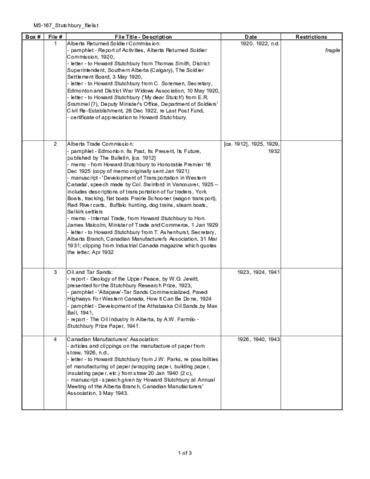 Howard Percival Stutchbury was born to Emily Chapell and William Stutchbury in 1874 in Taunton, Somerset, England. When he was 5 years old, the family immigrated to Canada and settled in Toronto. He was a member of an early class of the Toronto Music Conservatory and was the baritone in a Verdi Quartet with the Conservatory. By 1890, Howard was working as a clerk in a law office in Toronto.

Howard married Isabel Hewston on 29 Apr 1898 in Toronto. They settled in Toronto and had two sons – Ewart and Elmer. Howard was working as a civil servant. The family moved to Edmonton in 1902 where a daughter, Audrey, was born in 1908.

Howard soon became prominent in business and public service. In 1915 he was appointed secretary-manager of the Alberta Returned Soldier Commission.

Five years later he was made the Alberta Trade Commissioner, a position he held until the office was abolished in 1936. Howard was the Provincial President of the Canadian Manufacturers’ Association and later made an Honourary Member.

In the late thirties and early forties he was with a company called Abasand Oils Limited, which was a pioneer company in the development of the Fort McMurray Tar Sands. He then became the secretary of the Edmonton Safety Council, and in 1955 he was appointed the Director of the Alberta Safety Council.

Howard was also prominent in music circles and, in association with Vernon Barford, he founded the Alberta Music Festival in 1908. Howard was a president of the Edmonton District Festival and, in 1913, donated the Stutchbury Cup, the principal award for outstanding vocalists in the Alberta festival for many years. He was a long-time member of the McDougall United Church and was the Choir Master at the church for many years. He was an honourary President of the Canadian Legion and sang Kipling’s ‘Recessional’ at Remembrance Day services in Edmonton for thirty years.

He was a lifetime member of the Canadian Manufacturers Association and was chairman of the Alberta and Edmonton branches. He was also an honorary president of the Canadian Legion and Lieutenant-Governor of the Tuxis Parliament of Alberta.

This fonds was donated to the City of Edmonton Archives by the Stutchbury family through the Northern Alberta Pioneers and Old Timers Association.

The material was arranged by the archivist by type of record.
The photograph was assigned an item number with the prefix EA-10.