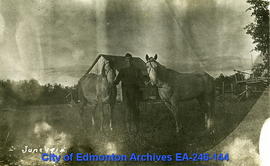 Hector Harry Thompson was born 5 Aug 1884 to Zelia Taylor and George Thompson in Germania, Ontario. Hector was the third oldest of eight children, and older brother to Winnifred Ross Thompson.

As a young man he worked for his father as a farm labourer and on his own in wood lumber. In summers he would work with horses. Around 1918 he travelled west to join his siblings, Wilfred, Keith, and Winnifred who had established the Ross-Thompson farm in Millet.

Hector also worked the horses for Helen Furlong, another famer in the Millet area. Later, Hector purchased a farm adjacent to the Ross-Thompson farm. He was known to always keep a diary, which was reported as ‘solving many arguments’.

The series consists of Hector’s diaries, documenting his daily life of farming, as well as family and community events. Hector wrote in the diaries every day from 1 Jan 1936 to 11 Jul 1967. The records also include some invoices, receipts, and correspondence.
The photograph is of Hector with horses.

The material was arranged by the archivist by date.
The photograph was assigned an item number with the prefix EA-246.