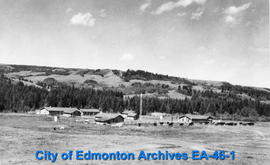 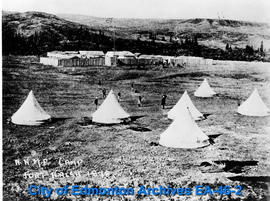 Harry Amos Maxted was born 18 May 1911 to Catherine Maher and Henry Thomas Maxted in Toronto, Ontario.
In the late 1950s Superintendent Harry A. Maxted was the Commanding Officer of the Royal Canadian Mounted Police (RCMP) Training Centre in Regina, Saskatchewan. He researched and wrote the manuscript 'Royal Canadian Mounted Police – Manual of Horsemanship'. At the time of donation, Harry Maxted was the Assistant Commissioner of the R.C.M.P. in Edmonton.
Harry Maxted died in 1996.

The fonds consists of two photographs of Fort Walsh, a former fort of the North West Mounted Police (N.W.M.P.) located in Saskatchewan near the Canada/U.S. border.
The first photograph is of the original fort in 1878. The second photograph is approximately the same view in the 1940s showing the reconstructed fort, with horses roaming in front.
The fonds also includes a 1905 Driscoll’s Map of Edmonton, 2nd Edition (EAM-48).

This fonds was donated to the City of Edmonton Archives by Harry Maxted in 1968.