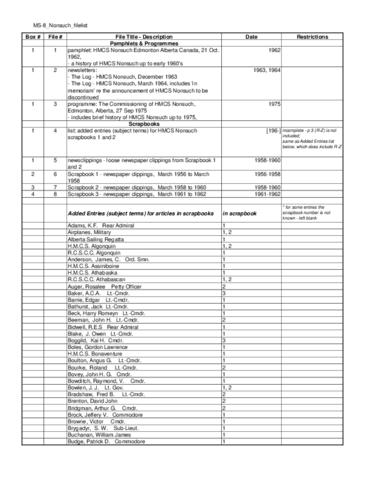 HMCS Nonsuch began as a half company naval reserve unit in 1923 under the guidance of Lt. Commander A.B. McLeod. They were housed in two rooms in the Prince of Wales Armouries. In 1939 the company acquired a permanent barracks at 102 Street and 97 Avenue, formerly the Hudson's Bay Company Stables. During the Second World War the unit went on active service and several thousand naval volunteers passed through basic training. In 1948 it was decommissioned as an active establishment. After the war a full time staff of permanent Royal Canadian Navy reserve officers was established and the base was re-equipped. The unit was decommissioned in 1964 due to federal government cutbacks, but was reopened in 1974 and restaffed by Lt. Commander H.F. Wallace in 1975 to hold an eight week summer training camp for new recruits. Their new base of operations was in the Kingsway Armed Forces Recreation Centre. By the late 1980s and 1990s the unit was winning top honors among Canadian naval reserves.

The fonds consists of three scrapbooks relating to HMCS Nonsuch activities from 1956 to 1962. Additional materials include 2 copies of a brief history of the unit written by the Rev. J.E. McGrane (Chaplain) in 1962 and the programme from the commissioning of the HMCS Nonsuch in September 1975.

This fonds was donated to the City of Edmonton Archives by Rev. J.E. McGrane in 1962 and Commander S. Cameron in 1966.